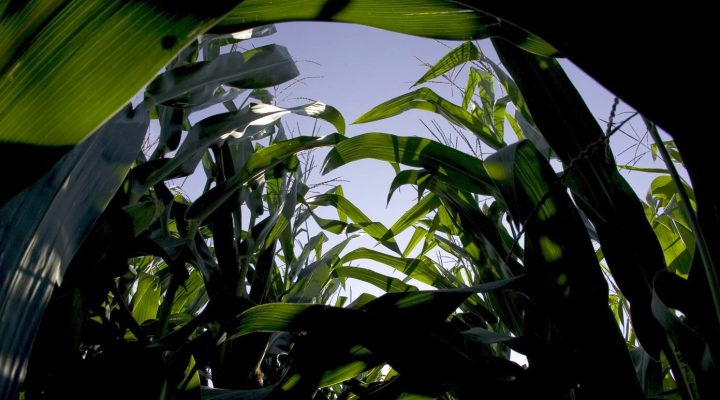 WASHINGTON — Scientists assumed leaves at the top of a plant would be the best at turning higher levels of light into carbohydrates–through the process of photosynthesis — while the lower shaded leaves would be better at processing the low light levels that penetrate the plant’s canopy of leaves. Turns out that in two of our most productive crops, these shaded leaves are less efficient than the top leaves, limiting yield.

These findings, published in the Journal of Experimental Botany, could help scientists further boost the yields of corn and Miscanthus, as well as other C4 crops that have evolved to photosynthesize more efficiently than C3 plants such as wheat and rice.

“The wild ancestors of C4 crops are thought to have grown as individuals in open habitats where the number of leaves that they produced would have been limited by water and nitrogen and most leaves would be exposed to full sunlight” said principal investigator Steve Long, Gutgsell Endowed Professor of Plant Biology and Crop Sciences at the University of Illinois.

“Today we grow these crops in ever denser stands, and provide them with nitrogen and water so that they can produce many more layers of leaves. But as a result, the proportion of leaves that are shaded has increased, and the production of grain will depend more and more on the contribution of this increasing proportion of shaded leaves. So how do the Maseratis of photosynthesis, C4 crops, do when they are on a meager meager fuel ration in the shade?”

Considering the crop as a whole, this loss of efficiency in lower leaves may costs farmers about 10 percent of potential yield–a cost that will increase as planting density increases. This ‘Achilles’ heel’ likely applies to other C4 relatives, such as sugarcane and sorghum.

“What’s interesting is that we saw this loss in efficiency in the lower canopy was not due to the leaf senescing and dying off–we would have expected that,” said first author Charles Pignon, a doctoral candidate in the crop sciences and at the Carl R. Woese Institute for Genomic Biology. “The leaves were still perfectly healthy when we were looking at them; they were even darker. In the article, we show through experiments that this was not caused by age.”

“Next, it will be important to find out why this loss in efficiency occurs and if there’s any way that we can fix it, since overcoming this and gaining a 10 percent increase in production would be very significant,” Pignon said.