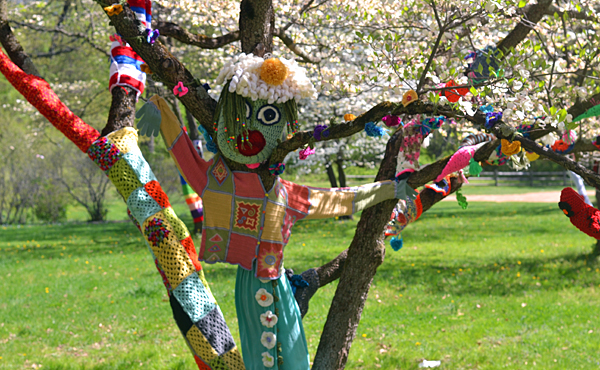 NEW BRUNSWICK, N.J. — A recent trend that is popping up in public spaces is yarn-bombing — the act of covering objects in public places with decorative knitted, crocheted or fiber material, as a form of street art. A combination of aesthetics and whimsy, yarn-bombing offers a fresh embrace on ordinary, even mundane objects, such as bike racks, benches, sign posts, fences and statues. Not just reserved for inanimate objects, yarn bombing has extended to trees — a way to turn virtual tree-hugging into an actual hug.

After observing yarn bombs in New York City and a few other places, Mary Ann Schrum, Rutgers Gardens programs and development manager, discussed the idea with colleague Clayton Leadbetter, plant breeding coordinator, about doing them at the Gardens. As they began their planning in the fall of 2018, Shrum and Leadbetter aimed their sites on “dropping” the yarn bombs the last week in April to coincide with the on-campus celebrations of Arbor Day and Rutgers Day, and remain through National Public Garden Week, May 13 – 19.

After identifying and measuring the trees, it wasn’t difficult to assemble a crew of enthusiastic Rutgers Gardens volunteers and staff member crocheters who worked all winter to construct bright, colorful, handmade coverings for 16 different trees, some with as many as 4 separate trunks. The individual crocheted and knitted coverings ranged in size from approximately 50 square feet for large, single-trunk specimens, to about 6 square feet for small branches and multi-stemmed trees, requiring significant yardage of yarn.

In addition to adorning many trees at Rutgers Gardens, the fence along Ryders Lane was decorated with bright, crocheted flowers, and a tree on College Avenue, as well as one on Cook/Douglas Campus were decorated for Rutgers Day.

In addition to organizing, Shrum and Leadbetter also did crocheting, and with the assistance of Rutgers Gardens education coordinator Debbie Henry and Robin Gleeson who helped coordinate the volunteers, an additional 19 people were crafting.

The yarn was donated from different groups, and the crocheters met a few times during the winter, but the designs were driven by the individuals doing the crocheting. Once the yarn bombs were put into place — the week before Rutgers Day, the pieces were wrapped around the trees like blankets and fastened with fishing line. When the displays are taken down, they are being donated to local animal shelters to be used for bedding.

As part of the university’s educational mission, the effort didn’t just stop at adornment. Admiring a tree’s physical presence doesn’t tell the tree’s significance in terms of its role in the ecosystem. A cooperative effort with students from Department of Human Ecology assistant teaching professor Jill Lipoti’s Practicum in Sustainability class and assistant research professor Mary Nucci’s Environment, Society, and Mass Media class involved making signage for the trees. Using the measurements from Rutgers Gardens, students entered the data into i-Tree software that quantifies the benefits and values of trees around the world.

“Rutgers Gardens is recognized for various gardens, particularly the Donald B. Lacey Annual Display Garden,” Leadbetter said. “But the unsung heroes, which serve as both a shade-providing canopy and backdrop to all of our other features, are the many mature trees on the grounds. While some provide fleeting shows of spring color and dazzling autumn displays, much of the year they blend inconspicuously into the background, despite their size. In order to bring much-deserved attention to these beautiful specimens, we wanted to do something extra special for Arbor Day this year.”

“Using trees efficiently and sustainably was part of the original crafts and handiwork that sustained human societies, from the harvest of bark and wood for basket making to carpentry and woodworking,” Struwe said. “Of course, trees also have deep ecological functions, from carbon uptake from the atmosphere to reducing erosion and becoming habitats for thousands of other species on Earth.”

Struwe added that the connection to trees as trees of life may be less strong today due to more urbanization, disconnection from nature and plant blindness.

“We don’t see and know the trees, we just see the green,” she said. “But just as handicrafts have become a less common activity among people, identifying and using trees for particular purposes has grown scarce.”

“In today’s world trees form a very important but sometimes invisible support network for ecological balance. We often take trees and their free and important ecosystem services for granted. They take up and store carbon dioxide and they spit out oxygen, they are creators of shade and reduced flooding, and lower local temperatures and give us beauty and food and memories. The event at Rutgers Gardens with its knitted trees highlights these rooted organisms with their silent but life-sustaining abilities,” Struwe said.