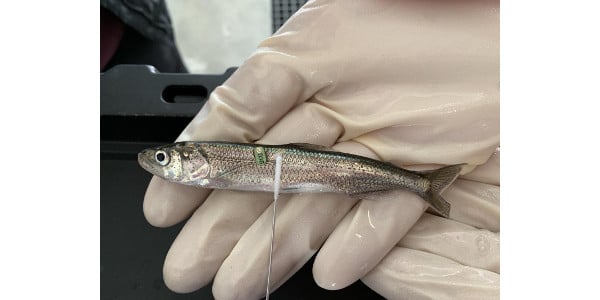 Longfin smelt can be difficult to differentiate from endangered Delta smelt. Here, a longfin smelt is swabbed for genetic identification through a CRISPR tool called SHERLOCK. (Courtesy if Alisha Goodbla/UC Davis)

DAVIS, Calif. — The gene-editing technology CRISPR has been used for a variety of agricultural and public health purposes — from growing disease-resistant crops to, more recently, a diagnostic test for the virus that causes COVID-19.

Now a study involving fish that look nearly identical to the endangered Delta smelt finds that CRISPR can be a conservation and resource management tool, as well. The researchers think its ability to rapidly detect and differentiate among species could revolutionize environmental monitoring.

The study, published in the journal Molecular Ecology Resources, was led by scientists at the University of California, Davis, and the California Department of Water Resources in collaboration with MIT Broad Institute.

As a proof of concept, it found that the CRISPR-based detection platform SHERLOCK (Specific High-sensitivity Enzymatic Reporter Unlocking) was able to genetically distinguish threatened fish species from similar-looking nonnative species in nearly real time, with no need to extract DNA.

“CRISPR can do a lot more than edit genomes,” said co-author Andrea Schreier, an adjunct assistant professor in the UC Davis animal science department. “It can be used for some really cool ecological applications, and we’re just now exploring that.”

WHEN GETTING IT WRONG IS A BIG DEAL

The scientists focused on three fish species of management concern in the San Francisco Estuary: the U.S. threatened and California endangered Delta smelt, the California threatened longfin smelt and the nonnative wakasagi. These three species are notoriously difficult to visually identify, particularly in their younger stages.

Hundreds of thousands of Delta smelt once lived in the Sacramento-San Joaquin Delta before the population crashed in the 1980s. Only a few thousand are estimated to remain in the wild.

“When you’re trying to identify an endangered species, getting it wrong is a big deal,” said lead author Melinda Baerwald, a project scientist at UC Davis at the time the study was conceived and currently an environmental program manager with California Department of Water Resources.

FROM HOURS TO MINUTES

Typically to accurately identify the species, researchers rub a swab over the fish to collect a mucus sample or take a fin clip for a tissue sample. Then they drive or ship it to a lab for a genetic identification test and await the results. Not counting travel time, that can take, at best, about four hours.

SHERLOCK shortens this process from hours to minutes. Researchers can identify the species within about 20 minutes, at remote locations, noninvasively, with no specialized lab equipment. Instead, they use either a handheld fluorescence reader or a flow strip that works much like a pregnancy test — a band on the strip shows if the target species is present.

“Anyone working anywhere could use this tool to quickly come up with a species identification,” Schreier said.

While the three fish species were the only animals tested for this study, the researchers expect the method could be used for other species, though more research is needed to confirm. If so, this sort of onsite, real-time capability may be useful for confirming species at crime scenes, in the animal trade at border crossings, for monitoring poaching, and for other animal and human health applications.

— University of California-Davis via EurekAlert!