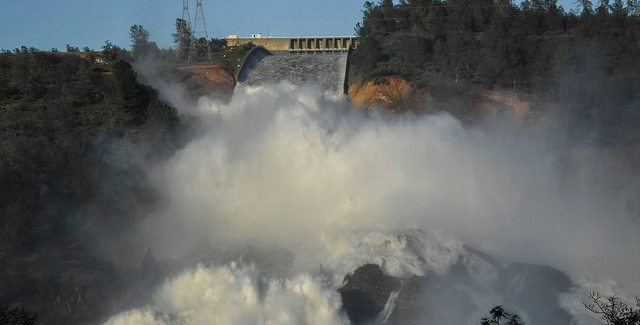 Both spillways at the more than half-century-old Oroville Dam started washing away in February, forcing officials to order the evacuation of nearly 200,000 people downstream for several days. (California National Guard, Flickr/Creative Commons)

State and federal authorities pushed through permits and funding to carry out the $28.5 million in Feather River levee repairs by December, which falls in the first weeks of California’s next rainy season. The repairs will strengthen three miles of levee that protects 75,000 people in and around the Feather River town of Yuba City.

Both spillways at the more than half-century-old Oroville Dam started washing away in February, forcing officials to order the evacuation of nearly 200,000 people downstream for several days. Additionally, authorities had to push large amounts of water downstream when the dam filled to the top, and farmers and others blamed the water surges for damage to their property.

California’s Department of General Services as of Thursday had received at least 80 claims from individuals seeking compensation for alleged financial harm stemming from the Oroville Dam crisis, agency spokeswoman Monica Hassan said. The state will consider claims ranging from hotel bills for evacuated families, farmers with damaged crops, or businesses that had to close briefly, Hassan said. The deadline for the claims is Aug. 11.

Claims so far include one from walnut farmers who say water releases because of the Oroville crisis destroyed part of their farm. The claim faults the state’s Department of Water Resources and the state division of dam safety.

U.S. water use declining for most crops and livestock production
November 17, 2020