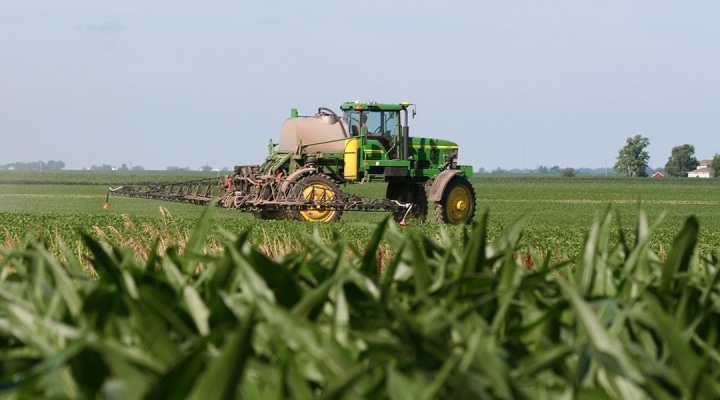 Traditionally, educators with Extension’s’ Pesticide Safety Education Program (PSEP) collaborate with IDOA to host around 40 training and testing clinics across the state each year. Without the possibility of in-person testing, the team quickly transitioned to digital delivery of the content and testing, easing worries for applicators. (Michelle Wiesbrook)

URBANA, Ill. — While many of us are staying at home during the COVID-19 pandemic, some 37,000 licensed pesticide applicators are going to work, ensuring an abundant food supply and weed- and insect-free outdoor spaces. Every year, about a third of these applicators sit down in testing locations across the state to renew their licenses. So, when it became clear in-person testing would be impossible this spring, thousands of jobs were on the line.

That’s when University of Illinois Extension and the Illinois Department of Agriculture (IDOA) sprang into action.

“We worked closely with the IDOA to determine logistics: who would need testing, what an online system would look like, how it would affect the long-term viability of our traditional training and testing clinics, and a host of other logistical issues,” says Michelle Wiesbrook, pesticide safety educator with Illinois Extension and the Department of Crop Sciences in the College of Agricultural, Consumer and Environmental Sciences (ACES) at U of I.

Traditionally, educators with Extension’s’ Pesticide Safety Education Program (PSEP) collaborate with IDOA to host around 40 training and testing clinics across the state each year. Extension designs the training manuals and delivers the programming, while IDOA administers the official tests. Applicators can take the exam without first attending a training clinic, but testing has always been in person with IDOA officials.

Without the possibility of in-person testing, the team quickly transitioned to digital delivery of the content and testing, easing worries for applicators. They made several key decisions right away.

“The first thing we did was automatically extend all licenses that expired at the end of 2019 through December 2020. So instead of a three-year license, they now have a four-year license,” says Doug Owens, bureau chief for the Bureau of Environmental Programs at IDOA. Current operators working under a licensed applicator may also skip the licensing requirement this year, as long as they receive safety training and supervision from the overseeing applicator. This is in line with federal requirements, but Illinois usually requires all operators to be licensed.

“That took some of the pressure off as far as numbers that would have to still get tested,” Owens says. “And since we couldn’t test in person in any way, shape, or form and won’t be able to for the foreseeable future, we started looking for other options.”

In-person exams have always been preferred to keep test-takers honest. With the outcome of the exam determining an applicator’s fitness for their job, the pressure to pass is significant. The team creatively brainstormed safe ways to bring folks together for in-person testing.

“We even considered using drive-in theaters as a testing venue,” Wiesbrook says. “We really were looking at all possible options, but ultimately landed on an online testing platform.”

Owens says 261 people applied to take the online test since April 4, and 148 of them received licenses. Scores have been in line with previous years, too.

“It was extremely helpful for my team to be able to obtain temporary licenses for this year to enable us to have high-quality research trials,” says Allen Mansholt, research and development specialist for the Crop Environmental Physiology team at Bayer in Jerseyville. “I know it wasn’t easy to put together, and I can’t thank the people responsible enough.”

Mansholt referred to study materials from Extension’s PSEP program to prepare for the exam. Wiesbrook says physical manuals and workbooks were previously available through an online store, but shipping is on hold due to the pandemic. To fill the void, she and her team whipped up a new online workbook tailored for those taking the general standards exam in its modified format. The workbook was designed to accompany private applicator training modules already available online, saving precious time.

First-time test-taker Luke Dotterer consulted a training workbook lying around at the family farm, but gives most of the credit to his Illinois education for his success. “I am a senior studying crop sciences in the College of ACES. With COVID-19 preventing us from meeting in person, I have been at home studying and working on the farm. I would say that my past three years as an undergrad have helped me in this because the material was right up my alley.” Those interested in coursework like Dotterer’s can learn more about ACES programs of study.

Licenses issued through the online test will be good only through the rest of 2020, with the expectation in-person training and testing will resume before the 2021 growing season. Until then, applicators can apply for temporary licensing by visiting the IDOA’s website.

Wiesbrook says, “Even in this unprecedented time, it’s really important to make sure our environment is protected and our applicators are protected, as well. I think our quick and creative solutions will ensure that they are.”