Subscribe
Home / Iowa / Craig and Flossie Morrison to be honored 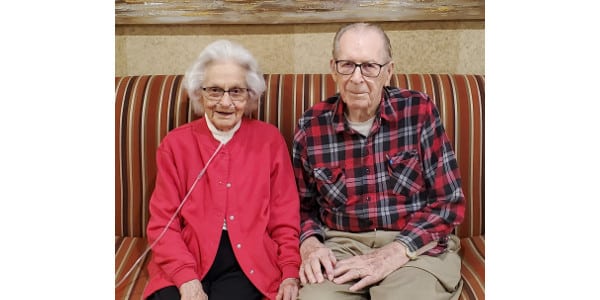 Craig and Flossie Morrison of Howard County will be inducted into the 2020 Iowa 4-H Hall of Fame during a virtual ceremony on Sunday, August 23. (Courtesy of ISU Extension and Outreach Howard County)

CRESCO, Iowa — Craig and Flossie Morrison are both graduates of Iowa State University and continue to be avid ISU supporters. Northeast Iowa and Howard County have been privileged to have such outstanding Iowa State University supporters of the County Extension Council and the Northeast Iowa Dairy Foundation. Both have dedicated hours serving youth in the community 4-H Club area as well as mentoring children in the Howard-Winneshiek school system. Their long-range vision has been an asset in aiding Howard County move forward and keep up with the changing pace of agriculture and education.

Craig and Flossie came to Cresco in March 1959. Craig graduated with a degree in Dairy Science and was hired to manage the Cresco Creamery. Flossie earned her degree in Home Economics and Institutional Management. Her first job in the district was a part-time school food service dietician. She became a Howard County Extension Council member and became the secretary in 1991. She was a hands-on council member who left little to chance. Her weekly office visits and participation in Extension events was symbolic of her belief in life long learning. Her commitment to the Extension Council was evident in the county being able to serve more youth through educational programming. In 2001, over 42% of youth in Howard County were reached with six hours or more of education.

In time, the Cresco Creamery was sold to Foremost Farms. Craig became an area representative for Foremost. Craig and Flossie facilitated the Dairy Expo which is sponsored by ISU Extension in cooperation with other organizations. Both served on committees for the establishment of the Northeast Dairy Center in Calmar, IA in which ISU Extension cooperated with Northeast Iowa Community College and the Northeast Iowa Dairy Foundation. Craig served on the Dairy Expo Board as the executive secretary for 30 years retiring in 2016.

In addition to her Extension Council involvement, Flossie has served on the Cresco Library Board and as President for over 20 years. She has been an active Philanthropical Educational Organization club member for over 50 years as well as an I Kappa Delta Sorority member.

Both are very active members in the Cresco United Methodist Church and have been actively involved in the Cresco County Club. Craig’s closing comments near the end of the interview are worth noting. “Young people are one of the most important groups. The guidance of 4-H teaches them great skills. The presence of an animal can teach them much.”

Linda Beitelspacher to be honored
August 18, 2020