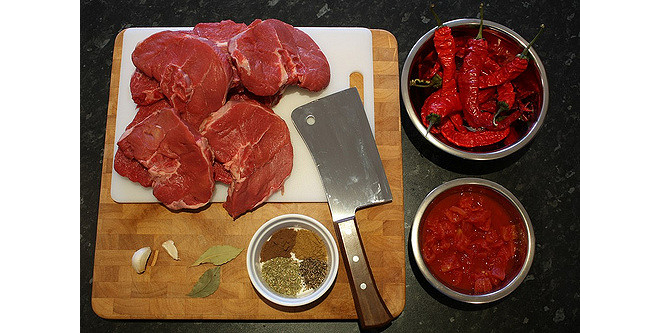 Craft butchers are a movement of meat producers returning to the small, local butchery that was once the norm. Part of the movement is a kind of radical transparency, where meat eaters are invited to witness butchers break down an animal. (toholio, Flickr/Creative Commons)

YOAKUM, Texas (AP) — A self-professed carnivore, Jack Matusek, has traveled around the world to learn the craft of butchery.

The Victoria Advocate (http://bit.ly/2ky2zYD ) reports Matusek grew up outside Yoakum and graduated from Texas Christian University in Fort Worth before bucking corporate culture for the life of a craft butcher.

He began his meat mission at a packing house in Hallettsville. Then he headed to New York City to a three-month butcher training program.

Matusek soon learned that in order for craft butchers to get the taste they sought they were working more closely with farmers.

From a fellow classmate in New York City, Matusek learned about a cooking school in France led by Kate Hill.

“We all are interested in touching our customer base and teaching them more about the food. It’s not just good for business,” Hill said. “The consumer has to appreciate what goes into it, not just the work but the joyfulness.”

Craft butchers are a movement of meat producers returning to the small, local butchery that was once the norm. Part of the movement is a kind of radical transparency, where meat eaters are invited to witness butchers break down an animal.

“First, it was chefs that were the rock stars in the food world,” Hill said. “Now, it’s the butchers. And we’re trying to pass it on to the farmer.”

Hill’s model for bringing attention to the farmer came from Dominique Chapolard, who has about 100 acres in France that he farms with his family. Chapolard and his family craft their meat from field to the local market, where they share with their customers the best ways to cook their product.

“It begins when you put the seed on the soil, and when you finish, the customer eats,” Chapolard said.

While studying overseas, Matusek ate traditional French dishes, such as blood sausage, pate and beef tartar. But he understands that the French palate and Texan palate are very different.

He plans to open up a butcher shop and supper club in the Dallas-Fort Worth area with hopes to eventually have a pig farm and slaughter house on his family ranch near Yoakum.

His dishes will be more traditionally Texan because he is Texan and is proud of what the state’s landscape has to offer.

“You can’t just go full bore and say, ‘Here’s blood sausage, eat it,'” he said. “I need to Tex-ify a little bit of everything I learned over in Europe. I can’t bring over a French pate, but maybe throw in some jalapenos, maybe some pecans. Making it more similar to what Texans are used to eating.”

Information from: The Victoria Advocate,http://www.victoriaadvocate.com