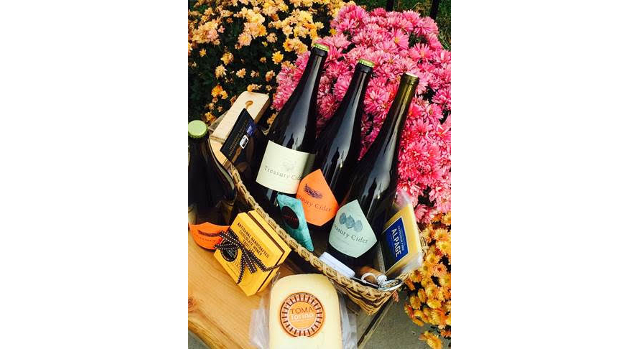 The Market’s expansion of products to include New York craft beverages builds on the State’s initiatives designed to boost its local cider, spirits, beer and wine producers. (Courtesy Photo)

State Agriculture Commissioner Richard A. Ball said, “Thanks to the State Liquor Authority and the innovative team at Todd Hill, we’re pleased that the Market has been able to expand its New York product offerings to include cider and beer.  There continues to be a great demand for our New York-made craft beverages, so we’re pleased that, through the Taste NY program, we can help connect consumers to their local New York-based farms, and food and beverage businesses.”

Taste NY at Todd Hill Market Manager Lachele Coninx-Wiley said, “Hard cider and craft beer are a new and exciting product category, which we are proud to represent at the Todd Hill Market.  Many of the producers featured in the store offer tours and tastings at their farms and breweries.  Stocking these brands works to promote agri-tourism in Dutchess County and across the State. Nearby Fishkill Farms is a perfect example of the connectivity of the Taste NY program.  In addition, the Todd Hill Market acts as an incubator to introduce smaller, artisanal brands to a large segment of consumers passing through our doors. We rotate stock to feature many craft beer and hard cider makers throughout the state, and the amazing varieties and styles which are produced in New York using hops, barley, wheat, apples and other ingredients grown here. These local effervescent beverages are a lovely addition to any great meal or festive gathering.”

The Market is rotating its inventory on a regular basis to showcase breweries and cider makers from the Hudson Valley and around the State, and the variety of styles that exemplify the craft beer and cider resurgence in New York State.  Visitors to the Taste NY Market at Todd Hill may find products from Chatham Brewing, Plan Bee Farm Brewery, Fishkill Farm’s Homestead and Centennial Ciders, Peekskill Brewery, Naked Flock, Sixpoint, Blue Point, and Captain Lawrence Brewery, just to name a few. Since the store received its license to sell craft beer and cider starting Labor Day weekend, sales have exceeded $12,000.

With the growth of local craft breweries and hard cideries, there has been a significant increase in New York State’s hop and barley production.  According to Cornell University, hops acreage has nearly doubled from 2013 to 2016 and as of 2017 there are about 400 acres in production. In addition, malting barley acreage increased during that three-year period to approximately 2,000 acres.  This industry has generated increased employment and economic development for value-added industries such as bottling plants, construction, transportation, printing and marketing.  The burgeoning craft beer and hard cider industry has contributed to a rise in the State’s agri-tourism industry.  Tourism in New York State generates over one billion dollars in annual revenue.

To be a licensed New York State farm brewery, the producer must produce beer with at least 20% of the hops and 20% of the other ingredients from local sources and New York State farm cideries need to use 100% New York apples. Starting January 1, 2019, for beer, 60% of hops and 60% of other ingredients must be from New York State.  Today, New York has the highest number of cideries in the country, with 66 craft cider makers and 42 farm cider makers. In addition, there are more than 400 breweries–the highest number in New York history.

Tom Crowell, owner/founder of Chatham Brewing, remarked, “Having the Taste NY Store at Todd Hill carry Chatham Brewing has been fantastic for our brand.  Many of our customers travel back and forth between New York City and the Hudson Valley.  The convenience of being able to pick up their favorite beer at Todd Hill has been hugely popular.  We have also gotten new visitors who saw the beer on the shelves and then decided to stop in at our taproom on their way north.”

Fishkill Farms Cider and Events Manager Stacy Dedring said, “We are tremendously grateful for the support New York State and Cornell Cooperative Extension Dutchess County have given to local family farms like Fishkill Farms. We are proud to have our award-winning, tree-to-bottle hard ciders featured at the Todd Hill Taste NY store alongside other fantastic New York State agricultural products. It is a wonderful opportunity for visitors to experience the best of what New York farmers have to offer!”

Launched by Governor Cuomo in 2013 to promote New York’s food and beverage industries, the Taste NY program has created opportunities for local producers to showcase their goods at a variety of stores and venues throughout the State and at large public events, such as the Great New York State Fair and the Barclays Tournament at Bethpage State Park.  It has also helped the farms and companies participating in the program to reach more customers, increase online sales, and, in many cases, expand the processing capacity of their business. Taste NY’s food and beverage businesses also support the State’s farmers by using New York grown and produced ingredients in their products.

New York products sold under Taste NY branding are available in more than 70 locations throughout the State as well as the New York State Office of Trade and Tourism in San Juan, Puerto Rico.

About the Taste NY Market at Todd Hill

Farms to get $19M for clean energy projects