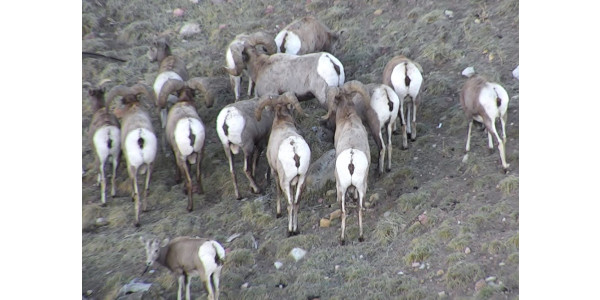 Colorado Parks and Wildlife biologists are heading to the skies to assess deer, elk and bighorn sheep populations by taking low-altitude helicopter flights in the mountain regions of southeast Colorado as well as on the eastern plains. (Courtesy of CPW)

COLORADO SPRINGS, Colo. — Colorado Parks and Wildlife biologists are heading to the skies to assess deer, elk and bighorn sheep populations by taking low-altitude helicopter flights in the mountain regions of southeast Colorado as well as on the eastern plains.

Critical monitoring flights already are underway in the mountains as biologists count and categorize deer, elk and bighorn sheep. Then, beginning Dec. 15, biologists will launch similar helicopter flights to study deer and bighorn sheep in the southeastern plains of Colorado to the east of I-25.

CPW biologists inventory thousands of animals statewide to develop a picture of the productivity and composition of big game in Colorado. The data is used to form population models, management strategies and to set future hunting license numbers.

Disturbances by the flights typically only last a few minutes in any one area.

“The flights can cause a short-term inconvenience, but they provide long-term benefits like healthy wildlife populations and productive hunts in the future,” Dreher said. “It’s vital we keep track of how our big game populations are doing so we can effectively conserve them.”

Already, biologists are flying over Fremont and Chaffee counties and will work north of U.S. Highway 50, through Lake County. Then the biologists will fly in south through Pueblo, Custer, Huerfano and Las Animas counties.

The eastern flight plan calls for helicopters to tour along the South Republican River drainage from Flagler to the Kansas state line. Then the helicopters will turn south into Kit Carson and Cheyenne counties followed by tours of Kiowa, Prowers and Baca counties.

The helicopter surveys will conclude with flights along the Arkansas River from the Kansas state line to Colorado Highway 71 and southwest along the Purgatoire River.

If the weather permits, CPW biologists hope to conclude their flights east of I-25 before Christmas. Helicopter surveys west of I-25 could continue into early January.