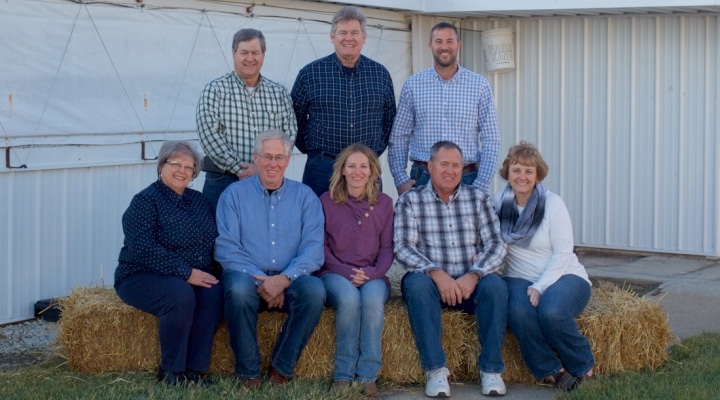 In 2020, Illinois Pork Producers Association proudly recognizes the Cowser Family, from Bradford, as the IPPA Family of the Year. Pictured are the Cowser family from left back: Marc, Darin and Alan Cowser; From left front: Charlotte and Steve Cowser, Cheryl Walsh, Andy and Carol Cowser. (Courtesy Photo)

SPRINGFIELD, Ill. — Each year, the Illinois Pork Producers Association (IPPA) honors a pork producing family who has contributed to the long-term success of the industry through leadership and pork promotion on the local and state levels. In 2020, IPPA proudly recognizes the Cowser Family, from Bradford, as the IPPA Family of the Year.

Four generations strong, the Cowser family has been building their family owned farm in central Illinois since 1932. Current owners include brothers Steve, Andy, Marc, and Darin as well as two of Andy’s children, Cheryl and Alan. Together this team of six is focused on setting up future generations for success.

In 1932, Delbert Cowser, wife Eva, and children Rodger and Phyllis became a first-generation farming family in the Trivoli area. He started with 80 acres, four work horses, and a herd of swine. Their farm grew to 200 acres and shortly thereafter to just over 300 acres and in 1949 Rodger joined his dad full time.

In 1951 the Cowser family transitioned to the Elmore Stock Farm in northwest Peoria County. Rodger and Annetta moved to the farm and raised six children: Andy, Darin, Marty, Paula, Steve and  Vonnie.

One by one Rodger and Annetta’s sons joined the farm. Pork production has always been a substantial focus for the Cowsers and in 1998 they grew that part of the business by purchasing a breed to wean barn with 1,200 sows. In 2005 they nearly doubled the barn. Today the Cowser Sow Farm is weaning an average of 1,100 pigs a week.

In addition, the Cowsers grow corn, soybeans, and hay while also custom farming. They also have a small cow/calf herd.

The fifth generation of Cowsers is already engaged, spending time at work with parents and grandparents, learning through 4-H programs, volunteering at farm related events, and telling their friends about their experiences on the farm.

The award was presented to the Cowser family on stage at the Illinois Pork Expo during the Legislative Reception by Senator Chuck Weaver and Representative Dan Swanson.