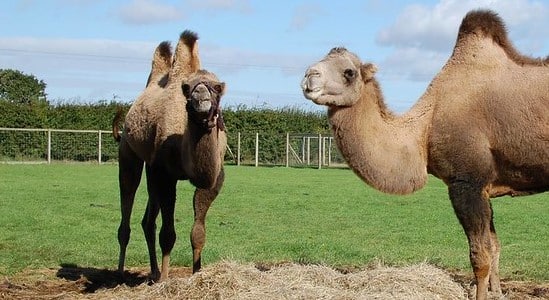 UCON, Idaho (AP) — Jeral Williams is a cowboy. He has 200 cows on his property near Ucon that he tends, several head of bison, six horses, two mules and a donkey. He wears a cowboy hat and sports a large mustache that ends with perfectly waxed round rings at the edges of his mouth the size of silver dollars.

But though his business is cows, he’s best known for another, non-Western animal: Camels. He has five.

“We just thought it would be fun, and it has been,” Williams told the Post Register. “Camels love you. They act like a dog. A horse just tolerates you because you feed her. Cattle don’t love you. Camels love you.”

On a recent visit to the camel lot — get it, Camelot? — at the Williams’ property, two of the camels came rushing over to greet visitors — a Bactrian (two humps) and a dromedary (one hump). One thing you notice right away: Adult camels are big — about 7 feet tall at the hump and more than 1,000 pounds. Despite their size, their greeting was akin to being happily sniffed by a giant golden retriever.

“We have people stop all the time,” said Jeral’s wife Jenine. “They see the camels in the field and stop to find out about them.”

When the Williams decided to buy their first camel 12 years ago, they looked on the internet under exotic animal listings.

“It’s amazing,” Jeral Williams said. “There’s some in Arizona, California; they’re all around.” His investigations led him to a much closer source: Dubois, Wyo.

“A guy over there kind of collected animals, and he worked from his house,” he said. “He had monkeys and everything.”

Jeral Williams said the man was selling all his animals so he could do some traveling. “The camel market in Dubois, Wyo., wasn’t very good,” he said. “He was willing to get rid of him.”

“Pretty much the same climate as Idaho,” Jeral Williams said.

Dromedary camels originate from the Horn of Africa and the Middle East.

“They get used to the colder weather here,” he said. “They grow longer hair in winter.”

The Williams’ other camels were bought in the Spokane, Wash., area, except for one from Illinois. Their names are Humphrey, 17, Dude, 7, Biscuit, 9, and Clyde, 3.

“There are about four or five breeders in the Spokane area that raise camels,” Jeral Williams said. “I don’t know why Spokane ended up with so many. People get them for petting zoos when they are little and then they get up a couple of years old and too big for petting zoos. So they’re trying to sell them and buy younger ones again.”

What do you do with a camel in Idaho?

Besides having a full social calendar during December appearing at live Nativity scenes, the camels make appearances at birthday parties, town parades and special events. The Williams have taken the camels to meet cancer patients at Camp Magical Moments in Swan Valley. Another event is the Fourth of July celebration at Scotty’s Drive-in in Idaho Falls.

“We met this woman, 94 years old, at Scotty’s Drive-in Fourth of July celebration,” Jeral Williams said. “She was so excited by the camels. We took a camel to her 100th birthday party, and she rode on the camel. I think she has to be the oldest person to ride our camels. She was queen for a day.”

Local veterinarian George Olaveson, who works with the Williams’ animals, said camels was a new one for his business.

“We didn’t know anything about camels,” Olaveson said. “We had to call the university, and they gave us some information. It’s been really interesting working with them. They are so fun.”

The Williams’ also have several bison. Six of the bison are white.

“I let everyone think they’re the rare special ones,” Jarel Williams said of his white bison. “The rare ones are the albino bison. These are white because they have genes from Charolais cattle somewhere along the line.”

He said his white bison caused a stir at Shoshone-Bannock Festival Powwow on the Fort Hall Indian Reservation with some Native Americans calling the animals “strong medicine.”

Recently, when showing off his bison at his home, he was careful to not get too close.

“I don’t trust these guys like I do the camels,” he said of his bison. “They like to poke holes in you.”

One exception, he said was his white bison named Buffy the Buffalo who was bottle-fed from birth.

“She’s been gentle and loving,” Jenine Williams said. “She jumps in the back of that pickup truck there and rides out into the field. It’s something she’s done since she was young.” The Williams said Buffy has walked in local parades with just a rope and one person leading.

“I tell the parade directors that my camels have to be apart from the horses,” Jarel Williams said. “They ask if it’s because the camels are scared of horses, and I tell them, no, horses go crazy when they see camels.”

While horses may not appreciate camels, people often have an affinity for them.

“When we ride them in the parades,” Olaveson said, “you see people standing up and shouting, ‘Hey, there’s some camels!’ ”

“That’s what they’re for, for people to enjoy,” Jarel Williams said.

Sustaining the tradition of ranching in California
January 30, 2020