Home / Oklahoma / Cow-calf producers: record multiple births
A new user experience is coming! We'll be asking you to login to your Morning Ag Clips account March 1st to access these new features.
We can't wait to share them with you! Read more here. 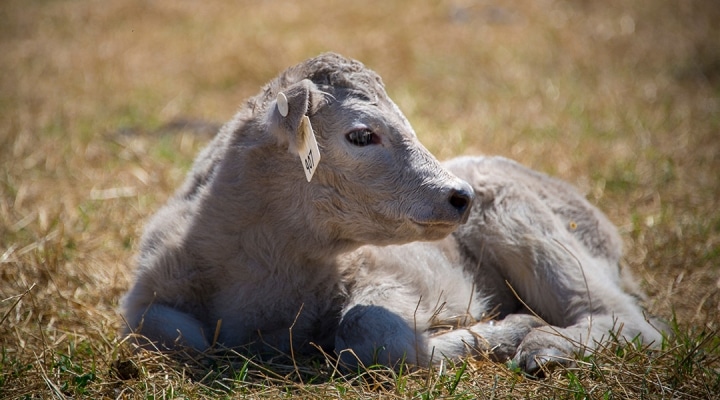 A newborn calf is a reason for joy, but twin births in cattle are a reason for caution. (Photo by Todd Johnson, OSU Agricultural Communications Services)

STILLWATER, Okla. — Cow-calf producers need to keep recordkeeping and genetic drift in mind when cattle births result in twins that are a heifer calf and a bull calf.

“This condition – called freemartinism – causes infertility in most of the female cattle born twin to a male,” said Dana Zook, Oklahoma State University Extension area livestock specialist for northwestern Oklahoma. “Freemartinism is recognized as one of the most severe forms of sexual abnormality in cattle.”

Longstanding OSU recommendations are for producers to write down twin births of calves while they are still nursing the cow, to ensure producers do not forget.

Estimates of the percentage of beef cattle births that produce twins vary. One of the more famous examples – reported in Hoard’s Dairyman, 1993 – puts the percentage at about 0.5 percent or one in every 227 births. Research indicates approximately half of the sets of twins should contain both a bull calf and a heifer calf.

“When a heifer twin shares the uterus with a bull fetus, they also share the placental membranes connecting the fetuses with the dam,” Zook said.

A joining of the placental membranes occurs at about day 40 of pregnancy. Thereafter, fluids of the two fetuses are mixed. This causes an exchange of blood and antigens carrying characteristics unique to each heifer and bull. When the antigens mix, they affect each other in a way that causes each to develop with some characteristics of the other gender.

“Although the male twin in this case is rarely affected by reduced fertility, the female twin is completely infertile in more than 90 percent of cases,” said Brian Freking, OSU Extension area livestock specialist for southeastern Oklahoma.

The transfer of hormones or cells can cause the female twin’s reproductive tract to be severely underdeveloped, and sometimes even contain some elements of the bull calf’s reproductive tract. In short, a freemartin is genetically female but has many characteristics of a male.

“The external vulvar region can range from a very normal-looking female to a female that appears to be male,” he said. “Typically the vulva is normal except that in some animals an enlarged clitoris and large tufts of vulvar hair exist.”

Freemartinism cannot be prevented. However, it can be diagnosed in a number of ways ranging from simple examination of the placental membranes to chromosomal evaluation.

Laurie Ann Lyon in “The Causes and Effects of Freemartinism” indicated producers can predict the reproductive value of an applicable heifer calf at birth and save the feed and development costs if they are aware of the high probability of freemartinism.

“Producers need to be aware that in some cases there are few if any symptoms of freemartinism because the male twin may have been aborted at an earlier stage of gestation,” Freking said. “These so-called hidden freemartins can be difficult to identify if purchased as replacement heifers.”

In some cases, producers may want to consider early weaning of twin calves to allow the birth mother to cycle in time with the other cows in the herd. Otherwise, the producer may be headed for management headaches during the next breeding season.

Oklahoma typically is the nation’s fourth- or fifth-leading producer of cattle and calves on an annual basis, according to USDA National Agricultural Statistics Service data.

OSU Extension is one of two state agencies administered by the university’s Division of Agricultural Sciences and Natural Resources, and is a key part of OSU’s state and federally mandated teaching, research and Extension land-grant mission.

OCA office closed to the public