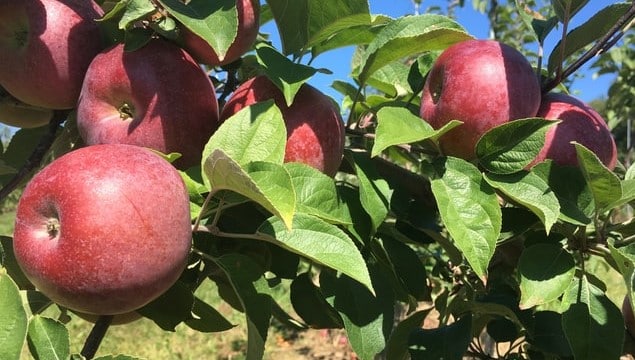 “There is also no risk of eating apples or any other products that were grown or produced from the orchards,” said Health Commissioner Dr. Mark Levine. (Photo by Westley Nelson B.A. on Unsplash)

MONTPELIER — Vermont’s top public health official said Tuesday the outbreak of COVID-19 among apple pickers in Addison County has been contained and there is no threat to the public.

Speaking at the state’s regular virus briefing, Health Commissioner Dr. Mark Levine said the total number of people infected in the outbreak is now 27, up one case from Monday.

But the latest case came from the same batch of tests that detected the first 26 and does not represent an increase in the size of the outbreak.

“Contact tracing has been completed and at this time the outbreak has been contained to the site,” Levine said.

He emphasized there is no known risk to the public.

“There is also no risk of eating apples or any other products that were grown or produced from the orchards,” he said.

The migrant apple pickers at Champlain Orchards in Shoreham arrived in Vermont on Sept. 14 and were at the end of a 14-day quarantine when one of them tested positive.

“We don’t believe this was acquired in Vermont,” he said. “It came with the person.”

Officials have not said where the workers are from, but state Deputy Agriculture Secretary Alyson Eastman had previously noted that that many foreign apple pickers in Vermont are from Jamaica.

Levine said one of the farm workers was hospitalized, although he did not know Tuesday if that person was still in the hospital.

He said the state and the orchard are working to ensure the farm workers have everything they need.

The orchard’s pick your own and farm market operations will be closed to the public on Tuesday and Wednesday.

“Our primary goal remains keeping our team, customers and communities safe,” the statement said. “Thank you for all of the support and kind words we have received.”

The Vermont Department of Health on Tuesday reported four new cases of the virus that causes COVID-19, none were part of the Addison County outbreak involving apple pickers.

Of the four cases, two were in Windsor County with one each in Chittenden and Windham counties.

The number of deaths from COVID-19 remains at 58. Vermont has not seen a COVID-19 fatality in over two months.

The travel data updated weekly by Vermont Commissioner of Financial Regulation Michael Pieciak showed the smallest number of people who can travel to Vermont without quarantining since a system was set up in June to determine who can safely visit.