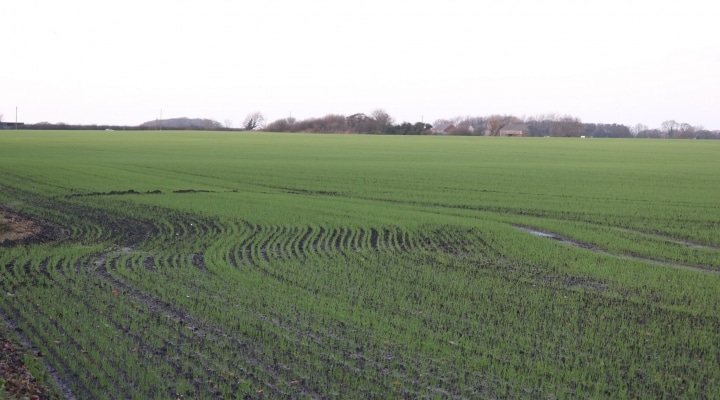 Winter is anything but a “slow” season in agriculture. Delaware’s winter months are as vital as spring’s planting, summer’s growth and autumn’s harvest. Winter is the time to cover up. For thousands of acres of Delaware farmland, the crucial seasonal practice adds a protective, verdant blanket into a farm’s crop rotation plan. (photo by Wildlife Terry, creative commons/flickr.com)

NEWARK, Del. — Winter is anything but a “slow” season in agriculture. Delaware’s winter months are as vital as spring’s planting, summer’s growth and autumn’s harvest. Winter is the time to cover up. For thousands of acres of Delaware farmland, the crucial seasonal practice adds a protective, verdant blanket into a farm’s crop rotation plan.

In the aftermath of the legendary Dust Bowl maladies of the early 20th century, planting cover crops was the takeaway lesson. Encouraging farmers to plant an intermediary crop in between production or “cash crops” became the mission of the U.S. Conservation Service, created to address the issue of soil erosion.

That mission continues with the National Resource Conservation Service (NRCS), a program within the U.S. Department of Agriculture. With offices in every state, the NRCS offers direct education and financial incentives for farmers. NRCS professionals works closely with Cooperative Extension professionals, certified crop advisers and related agriculture industry to share the cover crops’ benefits, which expand far beyond preventing soil erosion.

In 2019, researchers from the University of Delaware’s College of Agriculture and Natural Resources were awarded a grant from the NRCS to examine how cover crop mixes — the use of more than one seed type, and termination timing of the cover crop — might affect availability and uptake of nutrients needed by agronomic crops that follow in the spring. The study examines how cover crops affect Delaware’s main production crops — corn and soybeans.

Amy Shober, a professor in the Department of Plant and Soil Sciences and Extension specialist in nutrient management, and Jarrod Miller, assistant professor and Extension agronomy specialist, administer the grant. The grant provided funding for a research graduate student to participate in the project.

UD alumna Jamie Taraila, who graduated in 2018, learned about the project from Miller while serving as a communications intern at the Carvel Research Education Center in Georgetown, which serves as one of the locations for the study. Taraila formally applied as a graduate student in the Department of Plant and Soil Sciences and began initial research on the project in June. A second location is county-owned farmland in Middletown, known as Marl Pitt.

Keeping nutrients in the soil
“The two study locations are significantly different,” said Taraila. “The Carvel location in Georgetown is sandy, coastal soil and regularly irrigated. Our Middletown location is dryland and offers loamy, finely textured soil compared to Sussex. It was important to have Middletown as a part of the study to show farmers who don’t have irrigation what results may look like for them.”

Studying mixtures of different types of plants as a cover crop is an emerging trend.

“A lot of farmers plant a single type of cover crop,” said Miller. “But, now there is a big push toward mixing. A biomass builder, such as a tall cereal rye, pulls nitrogen out of the soil in the fall, and clovers add nitrogen in the spring when the cash crop needs the nutrient. We get both out of a cover crop mixture.”

“While use of cover crops has become more popular in Delaware in the past few years, growers still have questions about how to best manage cover crops to achieve the desired environmental benefits and realize profitable cash crop yields,” added Shober.

Traditional cover crops used in crop rotation are typically classified into cereal grains, such as sorghum, triticale, cereal rye, annual ryegrass; brassicas, such as canola or rapeseed, radishes and legumes such as crimson clover or hairy vetch. Cereal rye, hairy vetch and crimson clover grow quite tall and add biomass and organic matter for soil health.

“We are trying to hit a sweet spot when managing cover crops,” Shober said of the study. “We want to produce enough biomass to provide benefits like nitrogen scavenging, weed suppression or nitrogen fixation (in the case of the legumes). But, we also want to make sure that cover crop residues will not negatively impact planting, emergence or early season nitrogen uptake by the agronomic crop.”

With 2020 marking the second year of the study, Taraila and her faculty mentors frequently visit both locations where three different cover crop conditions are observed. Two mixes are planted — cereal rye with crown vetch and cereal rye with clover, and another planting of rye alone. Observations are also made on control plots without any cover crop.

On her visits to research plots, Taraila collects a tissue section of the cover crop and sends specimens to UD’s soil lab to determine the carbon and nitrogen (N) ratio.

“That gives us density and weight,” Taraila said. “We also take soil samples at two depths in each plot, then the soil testing lab will analyze for N ammonium-N and nitrate-N.”

Miller added, “The combination of the data is important because some of these plots may have a different amount of growth — it is not just the percent of nitrogen — if you have more vetch you have more total nitrogen. In Middletown, where it was cooler in the crop year 2018-19, we had less growth and, therefore, less nitrogen.

A Technological Point of View
The research is aided by yet another assistant — an unmanned aerial vehicle (UAV) or drone. While not officially part of the study, Miller’s expertise in drone technologies lends additional data and perspective to the study. Working with a drone provides Taraila with a unique experience.

Miller’s drone, a DJI Matrice 210 equipped with Altum multispectral camera, produces Normalized Difference Vegetation Index or NDVI. The images, taken about once a week, will indicate the biomass and match that with the plots, soil tests and plant tissue results to see if there is any correlation among the data.

“So these plants growing right now at Carvel are absorbing red and reflecting green. What you can’t see here is that it is reflecting near-infrared light off of the cell walls. When a plant starts to die, it changes the amount of red near-infrared it reflects or absorbs,” Miller said. “Now we have the NDVI measurement — a picture, carbon, nitrogen and biomass. There are more indexes than NDVI, but this one is well known.”

Miller is eager for Taraila to develop this specialized skill set.

“Working with this technology broadens Jamie’s expertise when she goes for a job,” Miller added. “She has obtained her commercial drone license, she’s gaining valuable experience with GIS software and the ability to extract data. This will be great for her resume.”

Her mentors encourage Taraila to get out and in front of agriculture stakeholders. Taraila presented the study’s preliminary findings before a large audience of more than 300 at Delaware Agriculture Week.

“The corn results in Georgetown showed that cover crops themselves had no effect on yield versus no-cover crop control. However, termination timing mattered, where later termination reduced yields by 16 bushels,” Taraila reported to the audience.

Taraila also shared that in Middletown, any planting of cover crop rendered a yield benefit of 12 to 15 bushels.

Building a graduate resume
Taraila feels fortunate to have access to the wealth of knowledge of her faculty mentors Miller and Shober.

“I have learned so much from them, even in casual conversations,” Taraila said. “Both are so approachable and they take the time to break down any questions I have. I am grateful to work with people who I admire and who are leaders in their areas.”

Taraila said she appreciates the proximity to industry and opportunities afforded her to be visible and network with other farmers and agriculture professionals. In addition to presenting at Delaware Agriculture Week, she attended the Mid-Atlantic Crop School held in November in Ocean City, Maryland, a three-day event that Shober and Miller coordinate to provide continuing education credits for certified crop advisers in the region.

Taraila feels connected to the project that recognizes both the yield increases as well as the environmental benefits cover crops provide. She recently viewed a television program about agriculture run-off into the Chesapeake Bay and sees her graduate work as pertinent and timely.

“With these cover crops, we are able to take up those excessive nutrients and hold them in the soil for when they are really needed, so they are essential for preserving the surrounding environment,” Taraila said. “We definitely have a lot of variables that we need to study and factor in. Deciding on the right cover crop, or the right mixture, and the timing of when it is planted and terminated is one of the most important challenges a  farmer will make. I am proud to participate in research that will convey the best advice to farmers.”