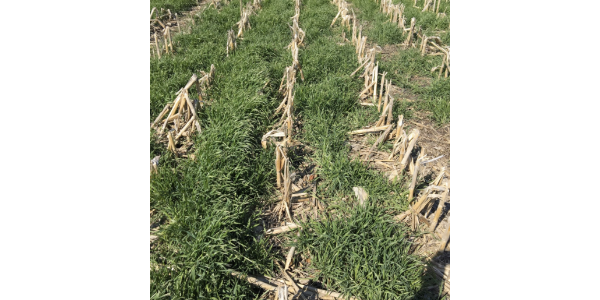 VERONA, Wis. — Your soil is your greatest resource, and managing your soil through use of cover crops can bring the benefits of better soil health, economic returns, and help to meet environmental goals. Including cover crops in your cash crop operation can make sense over the long haul.

“One of the long-term benefits to cover cropping is improved moisture availability through better infiltration and retention of water. This means crops will be better able to withstand short dry spells, leading to more stable yields,” said Dr. Jim Friedericks, AgSource Laboratories’ Outreach and Education Advisor.

Often there are increased yields of the next crop planted after a cover crop. Yield is influenced by several soil characteristics including nutrient availability and the physical traits of the soil, both of which can benefit from cover crops.

Cover crops are also useful in nitrogen (N) management, according to research conducted for the Iowa Nutrient Reduction Strategy. Nitrogen is lost through leaching of nitrate from the soil. A cover crop such as rye grass will utilize this available nitrogen and can reduce loss by about 30 percent, Friedericks said.

Phosphorus (P) losses, which usually take place through wind and water erosion of the soil, can be reduced with cover crops by about 28 percent, said Friedericks.

He added that cover crops not only improve soil health by increasing organic matter and improving soil structure, but they also create a more stable and active microbial population in the soil. “Soil organisms actually have increased growth around plant roots where they utilize soil nutrients and organic matter for their metabolism, releasing those nutrients over time where plant roots can easily absorb them,” he explained.

When a cover crop is used in a corn and soybean rotation there is a chance of yield loss with corn. Friedericks noted that research from Iowa State University shows that killing the cover crop at least two weeks before planting can reduce the chances of that yield reduction.

“A soil health test will reveal organic matter levels and nitrogen levels that can aid in the decision of the mix of cover crops to use,” he noted. “Testing will also help track the benefits of cover crops over several growing seasons.”

AgSource is a leader in agricultural and environmental laboratory analysis and information management services. A subsidiary of Cooperative Resources International, AgSource provides services to clients in the United States and across the globe. Learn more at www.AgSourceLaboratories.com.