Home / Ohio / Cover crops conserve sparkling streams
A new user experience is coming! We'll be asking you to login to your Morning Ag Clips account March 1st to access these new features.
We can't wait to share them with you! Read more here. 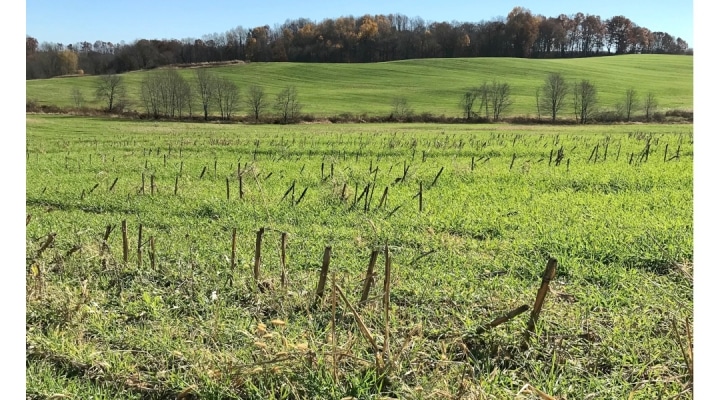 Green fields in November and December are a sign of conservation at work. Cover crops provide protection for harvested crop fields by thwarting erosion at the very first step — by keeping a raindrop from impacting bare soil. (John C Lorson)

FREDERICKSBURG, Ohio — Today I am writing from the intersection of my night job as an outdoor writer and nature geek and my day job as a conservation technician for the local Soil & Water Conservation District. In many ways they are two sides of the same coin.

Small streams are infinitely important to the flora, fauna and human livability of our area. Not surprisingly, nearly every land use decision we make may affect the quality of the water flowing in those streams. Some fine examples of the beauty and diversity of small streams can be found while traveling the Holmes County Rail Trail.

You’ll pass over one small stream or another no fewer than seven times in the ten miles between Fredericksburg and Millersburg. Three of those crossings will be over Salt Creek, which wends its way through southern Wayne and northern Holmes counties, and more or less parallels the trail for a mile or two until turning west to ultimately join Killbuck Creek just northwest of Holmesville.

At one point in its journey the stream runs within easy view as you pass by on the trail. If you take a moment to pause there you’ll find an exceptionally beautiful rock-bottomed streambed under a steady flow that remains clear through all but the most relentless of springtime rains. The clear water is an indicator of a stable system.

Thickly forested hillsides rimming the valley seep generous amounts of cool, clear water into the drainage year round. Few things do more for water quality than forested land. From the moment a raindrop forms within a cloud gravity becomes its master. By the time that droplet reaches the earth it’s traveling at about 20 mph. Though tiny, it packs quite a bit of energy in its punch. If it plows directly into bare soil it will blow it to bits signaling the beginning stage of soil erosion. Evidence of the destruction shows up very quickly in neighboring streams as suspended silt. However, if that same droplet strikes a leaf, limb or blade of grass before making it to the ground it spends its destructive force on that impact. The raindrop then gently makes its way to the soil below.

Soil that is covered remains intact. It doesn’t cloud streams. It doesn’t clog streambeds and reservoirs and doesn’t carry away precious nutrients from productive croplands. That is the very principle behind the bright green blush you’ll see emerging from the tan stubble of harvested corn and soybean fields at this time of year. Bare ground in the late fall, winter and early spring is a recipe for ecological disaster in the form of erosion. Cover crops, planted by farmers either just after harvest, or even seeded before harvest with low-flying airplanes, work quickly to build a barrier between the sky and the soil.

Rain falling on fields covered in green is rain that has been robbed of its destructive force and harvested for its benefits. The roots of oats, barley and ryegrass covers not only hold the soil in place, but also offer a pathway for water to find its way deep into the soil recharging groundwater stores. Radishes and turnips drill deep and bust up compaction caused by farm machinery so the next crop can more easily root in the soil. All the while, photosynthesis allows the cover crop plants to gather energy from the sun that would have otherwise been wasted on barren fields. In the spring those nutrients can be harvested as forage for livestock, turned into the soil as “green manure” to nourish the next crop, or knocked over and planted into, thereby providing a layer of mulch to protect tender young plants.

While it might at first seem that all of this is a bit off topic for the column of a naturalist, it’s important to remember that our agricultural producers are some of the most conservation-minded individuals among us. The land is more than just a peaceful retreat, beautiful viewscape or a place to get away from it all — it’s their passion and livelihood. Farmers are in a unique position to make choices that have real, immediate and long-lasting impacts on the environment.

Next time you’re out on the trail and notice the clear water flowing under that trail bridge take a look around. If you find fields clothed in bright green in the middle of winter, you’ll know who to thank.

If you have comments on this column or questions about the natural world please write The Rail Trail Naturalist, P.O. Box 170, Fredericksburg, OH 44627 or email John at jlorson@alonovus.com.