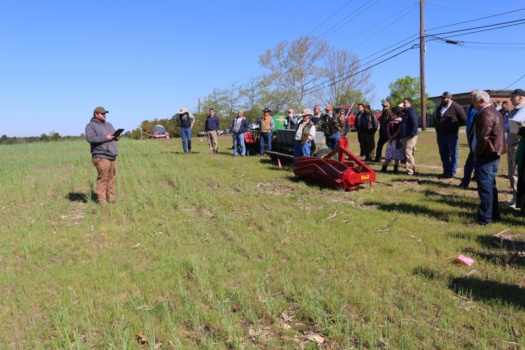 Cody Bishop, farm manager for Clemson’s Sandhill REC, explains cover crops that are being grown in the sandy soil of fields at the Center. (photo provided by Clemson Public Service and Agriculture)

COLUMBIA, S.C.  — South Carolina soils are old and weathered, and Clemson University researchers are working with the Richland Soil and Water District and the United States Department of Agriculture Natural Resource Conservation Service to teach the public how growing cover crops can help rejuvenate and put some life back into the state’s soils.

The researchers met with some South Carolina residents for a cover crop workshop at Clemson’s Sandhill Research and Education Center. The workshop, organized and sponsored by the Richland Soil and Water Conservation District and the United States Department of Agriculture Natural Resource Conservation Service, was held to teach the public about what cover crops to plant in sandy soils. Cover crops are non-cash crops planted when cash crops are not in fields to protect and enrich the soil. A Clemson researcher has found cover crops can increase soil moisture by 10 percent.

The Sandhill REC lies in the Sandhills area of South Carolina where soils have formed from unconsolidated sands and have undergone slight-to-moderate erosion. Dry, sandy soils found in this region are strongly acidic. Organic matter fertility is low because the soil lacks the ability to retain water and provide plant with nutrients. This area covers more than 2 million acres of the state. Kathy Coleman, Sandhill REC director, said a field day covering cover crops for sandy soils is something that would benefit many South Carolina residents.

“We had a few fields that didn’t have anything planted in them,” Coleman said. “We planted demonstration plots of cover crops in these fields so that people could see what cover crops they could plant in their fields to benefit them.”

During the workshop participants were treated to a tour of cover crop demonstration plots by Cody Bishop, Sandhill REC farm manager. Bishop planted several plots of mixed cover crops for the different seasons.

“We have poor soil quality due to high sand content and deep sand soil structure here at the Sandhill REC,” Bishop said. “We planted these cover crops so that we could improve the soil health on our fields.”

A mix of rye, oats, crimson clover, hairy vetch, rape and radish produced the most mulch, said Bishop, adding that benefits were seen from each cover crop mix planted.

Cover crops has been the focus of researchers from Clemson’s Edisto REC in Blackville. The researchers were on hand to talk about their studies during the workshop. Bhupinder Farmaha, a nutrient management specialist at Edisto, said growing cover crops between cash crops in fields can help improve the health of South Carolina’s soils.

“Previous research from Edisto REC shows that cover crops increased soil moisture by about 10 percent,” Farmaha said. “Cover crop root systems also help keep the soil from compacting by providing pores in the soil so that water can infiltrate better.”

The Edisto researchers found growing winter cover crops of hairy vetch and crimson clover can provide nitrogen, which can be used by cash crops planted later.

Costs associated with cover crops varies, depending on which cover crop is grown and their seeding rates. In a new study, he is using 40 to 50 pounds of cover crop seeds per acre with the aim of seed cost not more than $25 per acre. Before growing a cover crop, Farmaha said there are a few things to consider, including:

“Often, nutrients that are released by cover crops are not always released at the time a cash crop planted behind the cover crops actually needs those nutrients,” Davis said. “So, there’s a little bit of a timing issue with cover crops that make them a little bit difficult to manage. But every farm is different. A number of farmers have told me that it’s taken them four or five years to learn how to manage cover crops on their farming operation, but they have begun to find ways to make it work in their system.”

“Roots provide pores that allow water to move through the soil,” Mikell said. “This helps prevent the soil from becoming compacted.”

Soil moisture retention is important. Jose Payero, an irrigation specialist also housed at the Edisto REC, talked about how moisture in the soil is needed for seed to germinate and grow.

In addition, cover crops can help with weed suppression. Mike Marshall, a Clemson Extension weed specialist at the Edisto REC, said cover crops planted in the fall suppress weeds by reducing the amount of light that reaches the soil surface, reduce temperature fluctuations in the upper soil profile and release chemicals that kill small-seeded weeds. In a study of the pigweed Palmer amaranth on cotton, Marshall said a cover crop mix of rye, oats, turnip, vetch, radish and clover that was planted in the fall in fields where cotton varieties were planted in the spring showed the most promise.

Events such as this where people learn how to conserve the land while using it to help sustain life are important. Chanda Cooper, conservation education analyst for the Richland Soil and Water Conservation District, said collaborations between her office and organizations such as Clemson University and the USDA are important.

“Cover crops are an important component of soil health,” Cooper said. “They offer a variety of environmental, as well as economic benefits. Farmers on sandy soils face a number of unique challenges, and the Sandhill REC, as its name suggests, is perfectly suited to support those growers with sand-specific research to help them make the best decisions possible for their farm businesses. The Richland Soil and Water Conservation District’s mission is to promote natural resources conservation.

“Agricultural producers have a huge opportunity to improve soil and water conservation by improving the soil health on their farms. They may also reap additional benefits from soil health practices including larger profit margins, reduced input costs and more resilient crops. Soil health is a win-win — it helps farmers and it helps the land.”

More studies at the Sandhill REC

In addition to cover crops, Sandhill REC researchers are involved in other studies, including an incubator farm, to help teach South Carolina residents how to become farmers. Coleman said research efforts have evolved and expanded to support the state’s $41.7 billion agribusiness industry.

“Here at the Sandhill REC, we are focused on meeting the changing agricultural needs of South Carolina,” Coleman said. “We have programs in agribusiness, wildlife, forestry, entrepreneurship, education and more. I invite everyone to find out more about our programs.”