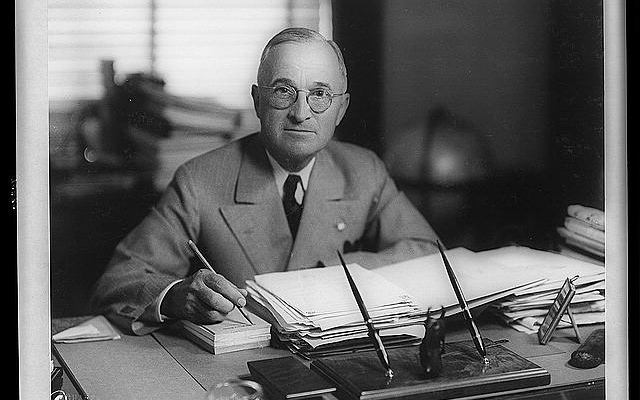 GREENWICH, N.Y. — Harry S. Truman became our nation’s 33rd president unexpectedly in 1945 after the death of Franklin D. Roosevelt. But did you know that one of the stops along Truman’s journey to the presidency was on his family farm? For eleven years President Truman worked on and part-owned a farm, and the experience helped mold him into the man who would eventually occupy the Oval Office.

Harry Truman was born on May 8, 1884 in Lamar, Missouri, the eldest child of John and Martha Truman. Harry’s father was involved in farming and livestock trading enterprises and the family moved around in his early years before landing in Independence, Mo. where he lived most of his childhood. About 20 miles away in Grandview, Mo., was the farm owned by Harry’s grandparents, Solomon and Harriet Louisa Young. This was a place the family lived for a brief period and Harry had many fond memories of the farm, one of which included riding his own Shetland pony beside his father as he made rounds on the farm.[1]

As a young man Harry worked at the National Bank of Commerce and later the Union National Bank in Kansas City. At the latter he was an assistant teller and earning $100 a month, a magnificent sum in his eyes.[2] However, the rest of the family had fallen on hard times and had been in financial troubles for several years after some bad investments by John. This prompted a move to Grandview to help Grandma Young operate the farm. Harry’s parents along with his brother, Vivian, and sister, Mary Jane, moved to Grandview in October of 1905. After a few months on the job, Harry’s father found the work too much for him and Vivian to handle, so he told Harry to quit his job and join them on the farm which he dutifully did. So it was in early 1906 at the age of 22 that Harry Truman became a farmer.[3]

The Truman Farm was 600 acres making it one of the largest in the county, and it required the full-time effort of Harry, John, Vivian, and several hired farm hands. The farm grew a variety of crops and livestock. Corn, wheat, and hay were the main crops grown on their acres, but they also grew potatoes and vegetables. In terms of livestock, they milked shorthorn cows, and at any given time raised beef cattle, sheep, thoroughbred horses, mules, and Hampshire hogs.[4] The five Trumans, Grandma Young, and later on hired helpers all lived in a seven-room farmhouse that had no electricity or plumbing. Harry, Vivian, and the hired help shared a room above the dining room that was very hot in the summers and very cold in the winters, something Harry remembered well.[5]

The move to the farm was quite the change from the Missouri metropolis of Kansas City, and many did not think Harry would make it. In reflecting on the move later in life Truman said of his co-workers at the bank, “All sorts of wagers were made that I wouldn’t stay over ten days–two weeks–a month–a year at the outside. I stayed ten years…”.[6] Days on the farm started at 5:00 A.M. with a call from his father at the bottom of the stairs when it was still dark out (and usually still cold). John was very demanding when it came to farm work. Whatever the task was he wanted it done perfectly, so Harry learned alongside his father fixing his mistakes as he went.

There was a myriad of never-ending farm duties to do. According to personal letters and oral histories of those who knew him, Harry did just about everything there was to be done on the farm. He plowed fields using an Emerson gang plow, planted corn and wheat, performed haying, milked cows, worked with pigs, hoed crops in the heat of the summer, doctored horses, repaired equipment, mended fences, and many other chores and duties. Another important task Harry took on was bookkeeping tracking the farm’s sales, purchases, and other expenditures.[7]

Farming did not come naturally to Harry. He reportedly disliked milking cows and referred to raking hay as a “cussin’ job.” In contrast to other farmers of his day Harry always seemed to look neat and never wore bib overalls. He was an accomplished piano player and would play during the mid-day break or at night after work. He would also help his mother and sister make the mid-day meal and according to a farm hand named Brownie Huber could, “stir up as good a batch of biscuits as any woman.”[8]

Regardless of these differences he took interest in seeing that the farm succeeded. In addition to learning from his father, Harry researched resources like Wallace’s Farmer to learn the latest scientific developments and even looked to the ancients for advice reading the Roman writer Cato’s De Agricultura at one point. This research paid off as the Truman’s farm began implementing crop rotation years before it was common practice in their area, leading to impressive results some years.[9] Eventually seeing his growth, John made Harry an official partner of the farm.

It is also worth noting that he began courting his eventual wife Bess Wallace during his years on the farm. Harry had known Bess since childhood and was always infatuated with her. After long hours on the farm, he would write letters to her in the evenings and visit her in Independence on the weekends when able. The pair courted for nine years and their correspondences offer a window into Harry’s thoughts and experiences on the farm.[10]

Things changed on the farm for Harry in 1914 when his father passed away and the task and weight of operating the farm passed solely onto him. This was something he felt deeply as he wrote in a letter to Bess saying, “I have quite a job on my hands now… You Know, I’ve been in the habit of running the farm for some time, but Papa always made it go.”[11] He continued the daily operations of the farm and kept it going through some challenges such as a family lawsuit regarding the farm that cost a great deal of money, and a failed investment in a zinc mine in Oklahoma that lost Harry and the farm money.[12] However, the farm remained in a good position and was a modest success due to the great commodity prices during that time period.

Harry Truman’s time as a farmer effectively ended in 1917 when he enlisted in the army after the U.S. entered WWI. Harry’s mother and sister kept the farm going while he was away. When he returned from France in 1919, he and Bess finally married, moved to Independence, and Harry opened a haberdashery in Kansas City before getting involved in politics. Much of the farm was sold after Harry got out of the “farming game” in 1919. Other portions were sold off in subsequent decades. Harry’s mother and Mary Jane continued to live on the farm until it was foreclosed on in 1940.[13]Today the original farmhouse in which the family lived still stands and is a part of the National Park Service’s Harry S. Truman National Historic Site which includes the Truman Home and other sites in Independence, Mo.

While Harry S. Truman did not remain a farmer all his life, his eleven years on the family farm greatly influenced him. For the rest of his life he would continue the practices of rising early and working hard. He came to enjoy the time the farm gave him to think saying, “Riding one of these plows all day, day after day, gives one time to think. I’ve settled all the ills of mankind in one way or other while riding along…”[14] The years on the farm helped transform him from a shy person to a confident leader. Looking back, Truman stated once, “I thought maybe by cussing mules and planting corn I could perhaps overcome my shyness and amount to something.”[15] Truman’s mother remarked on his transformation as well saying, “… it was on the farm that Harry got all his common sense.”[16] Even as he ascended to the highest position in the land and was the first president to lead the United States as a global super power, Truman carried these traits from the farm with him and still saw himself as a ‘plain-spoken man from Missouri’. He never wanted to forget where he came from, and, indeed, he never did.

P.S. Get in the garden