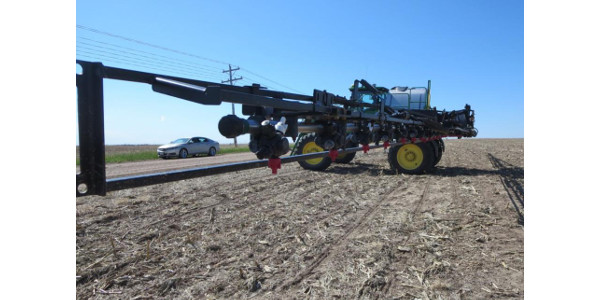 In a decision that turns largely on scientific methodology and reliable data, the Ninth Circuit Court of Appeals on July 22 allowed continued registration of the Enlist Duo herbicide developed by Dow AgroScience (Corteva). Unlike last month’s decision that vacated registrations of three dicamba herbicides, the two-judge majority on the court held that substantial evidence supported the EPA’s decision to register the herbicide. (Photos by Bob Klein)

COLUMBUS, Ohio — In a decision that turns largely on scientific methodology and reliable data, the Ninth Circuit Court of Appeals on July 22 allowed continued registration of the Enlist Duo herbicide developed by Dow AgroScience (Corteva). Unlike last month’s decision that vacated registrations of three dicamba herbicides, the two-judge majority on the court held that substantial evidence supported the EPA’s decision to register the herbicide.

Even so, the court sent one petition back to the EPA to further consider the impact of Enlist Duo on monarch butterflies in application areas. One dissenting judge would have held that the science used to support the Enlist Duo registration violates the Endangered Species Act.

The case began in 2014, when the same organizations that challenged the dicamba registrations (National Family Farm Coalition, Family Farm Defenders, Beyond Pesticides, Center for Biological Diversity, Center for Food Safety and Pesticide Action Network North America) and the Natural Resources Defense Council each filed petitions challenging the EPA’s registration of Enlist Duo.  The EPA later amended the registration in 2015 and 2017, eventually allowing use of the herbicide on corn, soybeans and cotton in 34 states.  The petitioners challenged the 2015 and 2017 registrations as well, and the Ninth Circuit consolidated the challenges into the case at hand.

The court’s opinion begins with an explanation of why it agreed with the parties who brought the challenges that they had the legal right to do so, or had “associational standing.”  Likely of higher interest to our readers is how the court answered the questions of whether the EPA adequately examined the potential impacts of Enlist Duo under the Federal Insecticide, Fungicide, and Rodenticide Act (FIFRA) and the federal Endangered Species Act (ESA).  Here’s what the court had to say about the petitioners’ claims under each law:

The FIFRA claims.  The monarch butterfly issue was the only successful FIFRA claim advanced by the petitioners.  The court agreed that the EPA didn’t properly assess adverse harm to monarch butterflies that would result from increased 2,4-D use on milkweed in application fields, despite evidence suggesting that the butterflies might be adversely affected.  The EPA stated that it didn’t do so because the approval of Enlist Duo would not change the amount of milkweed being controlled by herbicides—those milkweeds would still be controlled with or without Enlist Duo.  The court disagreed, stating that FIFRA required the agency to determine whether any effect was “adverse” before then determining whether the effect on the environment was unreasonable, which EPA didn’t do in regard to the monarch butterfly.

The court rejected all of the petitioners’ other arguments under FIFRA:

Applicable standards.  Several claims that the EPA applied the wrong FIFRA registration standards failed.  The agency correctly used the broader and more stringent standard, which was to determine whether the registration would cause any unreasonable adverse effects on the environment.

Volatility risk.  The court also rejected volatility risk arguments, one of the science-heavy parts of the opinion (begin at page 37 for a good read).  The EPA had concluded the type of 2,4-D in Enlist Duo exhibits lower volatility and off-site vapor drift than other forms of 2,4-D.  EPA reached this conclusion based several studies and data points:  a laboratory study that examined degree of visual damage, six publicly available studies assessing plant growth and survival damage, data from a vapor flux study used to perform computer modeling to determine dose level and air concentration in order to predict adverse damages to plants off-field, a second type of modeling that assesses drift of wet and dry depositions, and atmospheric monitoring data.  Petitioners claimed limitations to the studies and methodology used, contradictions between EPA scientists, failure to follow regulatory guidelines and to consider large enough field sizes in its modeling.  The court commented that the evaluation of volatility “probably could have been better,” but found no evidence showing that EPA’s conclusion was wrong or that volatility fears had materialized since approval of the herbicide.  The court explained that the agency may apply its expertise to draw conclusions from probative preliminary data and “it is not our role to second-guess EPA’s conclusion.”

Mixing risks.  Petitioners also argued that Dow intended to mix Enlist Duo with glufosinate and EPA failed to account for the synergistic effect of such mixing.  With no evidence other than an abandoned patent application for a mixed product by Dow, the court held that FIFRA doesn’t require an analysis of theoretical tank mixing but only that which is contemplated on the label.

Nearly all of the EPA’s FIFRA decisions were supported by substantial evidence, the court concluded, with the exception of the monarch butterfly analysis.

The ESA claims.   Science is a recurring theme in the court’s analysis of the petitioners’ ESA arguments, and also the source of sharp disagreement on the court.  ESA’s section 7 requires a determination of the biological impacts of a proposed action.  ESA consultation among the agencies is required if determined that an agency’s action “may affect” a listed species or critical habitat in an “action area.”   The petitioners claimed that EPA failed in its determination on several grounds, requiring the court to review whether the EPA’s determination was arbitrary, capricious, an abuse of discretion, or contrary to law.  Here are the arguments, and the court’s responses:

“No effect” finding.  The petitioners argued that the EPA erred in determining that Enlist Duo approval would have “no effect” on plant and animal species and the court responded with another lengthy science-heavy discussion of “risk quotient” methodology and legal requirements  to use the “best scientific and commercial data available.”  The EPA employed a risk quotient methodology to conclude that there would be exposure to the herbicide but that such exposure would not lead to an effect on plants and animals.  The two judges in the majority were willing to defer to the agency on this conclusion and its dependence on the risk quotient methodology, but Judge Watford strongly disagreed.  Pointing out that the National Academy of Sciences had advised the EPA that the risk quotient method was “scientifically unsound,” the dissent concluded that the data derived from the methodology did not qualify as “scientific data” and therefore violated the ESA.   The majority stated that the risk quotient methodology doesn’t violate the duty to use the best scientific and commercial data available, which means that the EPA must not disregard available scientific evidence that is better and does not require the agency to conduct new tests or make decisions on data that doesn’t exist. Deference to the agency was warranted, said the majority, and restraint against second guessing or using the court’s judgment.

Action area.   For its ESA determination, the EPA limited the “action area” to treated fields, while petitioners argued that the herbicide would drift beyond treated fields.  Again turning to the EPA’s science, the court held that the agency had science-based reasons for limiting the target area.  The EPA had appropriately accounted for drift through empirical data, mitigation measures, and label restrictions and no evidence in the record supported that the agency had made an error.

Critical habitat.  The final argument advanced by petitioners was that EPA did not meet its duty to insure that there would be no “adverse modification” of critical habitat from the registration.  Although there were 154 species with critical habitats in the states where Enlist Duo would be approved, EPA concluded that 176 of the species would not be in corn, cotton or soybean fields.  Of the eight species remaining, the agency determined that there would be no modification to their critical habitats as a result of Enlist Duo registration because none of the species’ essential features or “primary constituent elements” were related to agriculture.  Petitioners challenged the methodology EPA employed to reach this conclusion, but the court once again disagreed and deferred to the agency.

With only the monarch butterfly impact analysis in need of further study, the Ninth Circuit declined the petitioners’ request to vacate the Enlist Duo registration.   The court chose instead to remand the petition without vacating the registration, stating that the EPA’s failure to consider harm to monarch butterflies was technical and not a “serious” error.  Pointing also to the “disruptive” consequences of removing a pesticide that has been in use for over five years, the court stated that vacatur was not warranted when the EPA had substantially complied with FIFRA and fully complied with the ESA.

Enlist Duo registration will continue.  The EPA must address evidence that its destruction of milkweed in fields harms monarch butterflies, however.  The court advised the agency to “move promptly” in doing so.

Further action by the petitioners is likely.  According to correspondence with DTN, the petitioners are disappointed and will fight the decision.  They will likely also follow the EPA’s science quite closely as it reexamines the monarch butterfly issue.