Subscribe
Home / National / Count me out of counting seeds 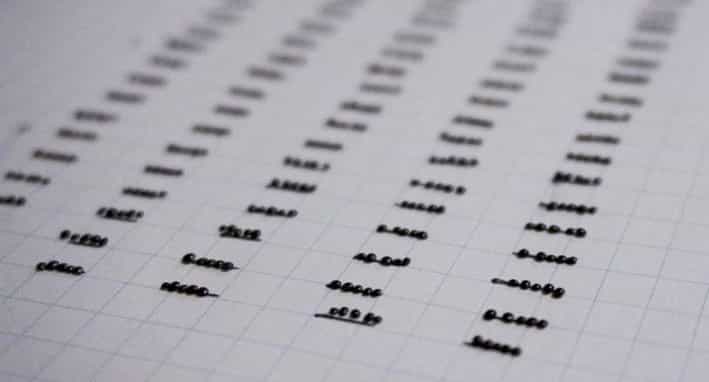 When seeds are hand counted, they are grouped on graph paper so they are easier to total. Hand counting can be a tedious process. (Matthew Bertucci)

A team of researchers at the University of Arkansas, Auburn University and North Carolina State University set out to see if a piece of technology, called a computerized particle analyzer, can be used to count weed seeds. Their results are promising and show the analyzer accurately counts seeds.

Matthew Bertucci, a scientist at Arkansas, says seed counting is a tiring yet important fact of life in their research.

“Many weed control strategies or studies evaluate the ability of an herbicide to kill weeds and elevate crop yields,” he explains. “However, weeds that have been stunted but not killed may still produce viable seed that can contribute to weed populations in later years. Monitoring weed seed production then becomes important to evaluating weed control efforts.”

The group focused on the seeds from one weed, called Palmer amaranth. It’s a summer annual weed especially troubling for row and vegetable crops. While native to the southwestern United States, it has spread from coast to coast.

These seeds have historically been counted by tediously hand counting a specific amount. Researchers then used that information to estimate larger quantities of seed.

To accurately hand count and double check seed numbers for this research, Bertucci and his team counted five seeds at a time and placed them in groups on graph paper.

While image analysis methods like the computerized particle analyzer are out there, there had not been scientific proof of accuracy. Many researchers still use hand counting methods. Bertucci wanted to test and report if this imaging technology is accurate.

The computerized particle analyzer is a table-top lab instrument. It has a long, fast-moving conveyor belt that sends the seeds across a camera. As the seeds are pushed past the light source of the camera, they cast a shadow that is recorded and counted. The camera takes many images per second. Special software analyzes the images to distinguish between seeds and non-seed material for counting.

About 2,000 to 2,500 seeds can be hand-counted and checked in half an hour. However, the computerized method can count that same amount in roughly 14 seconds. Accounting for the time to load samples and clean the instrument, it can take just three minutes from start to finish.

Researchers think this technology can be used for other kinds of seeds. But, they would have to fine-tune software for each weed species based on their characteristics like size and weight.

The researchers also checked the accuracy of two hand counting methods used to count a subset of seeds and then estimate a larger amount. While they differ in how they begin the counting process, they were both found to be highly accurate.

“Our findings are encouraging because we found the previously-reported methods are reliable and accurate, and that the computerized method can offer a more rapid alternative if available,” Bertucci says. “This research was exciting for me because I saw it as an opportunity to improve something that is mundane and has room for error. I was excited to explore any alternative and share that information with other researchers.”