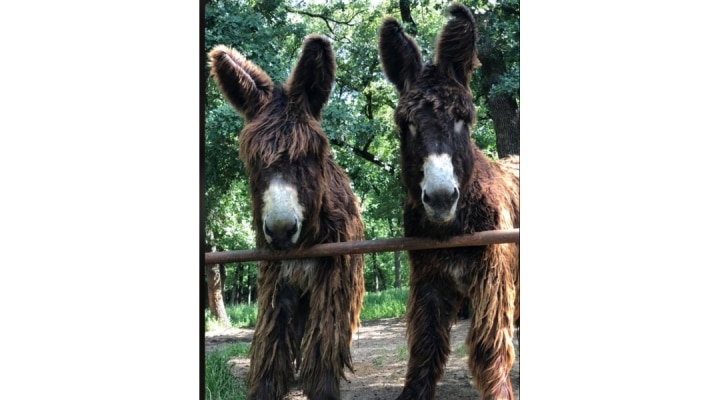 PITTSBORO, N.C. — The first U.S. Poitou donkey census is currently underway at The Livestock Conservancy. More rare than Black Rhinos and Giant Pandas, it’s estimated only 70 purebred Poitou donkeys are left in America, and fewer than 500 remain throughout the world. Documenting the American population is the first step in developing a successful recovery plan for this critically endangered equine breed.

With shaggy coats and affectionate natures, it’s easy to see why Patrick Archer and Christopher Jones of Texas Poitou Donkeys in Grandview, Texas, love this rare breed. “Spend one hour with a Poitou, and you begin to understand why this breed is so special and deserves a future,” Archer said. “They are gentle, affectionate, and somewhat goofy. Foals want to crawl in your lap from day one, and even our intact jacks are calm and gentle.”

Archer and Jones own the largest herd of Poitou donkeys in the U.S. and are generously supporting The Livestock Conservancy census. Their love of the breed is contagious, and they hope to find other breeders who are just as passionate about safeguarding this genetic treasure for future generations.

The Archer/Jones Poitou Donkey American Census will develop an accurate list of Poitou donkeys in the U.S. based on scientific procedures. Participants will collect a mane or tail hair sample on every animal identified, both purebred and crossbred. DNA testing of the samples will identify lineages and bloodlines, confirm parentage, and determine the genetic health of the American Poitou population. Genetic testing will also allow The Livestock Conservancy to identify introgression, or crossing, with other breeds for individual animals. New genetic markers specific to Poitous and currently in use by Races Mulassières du Poitou (the French Poitou Association) will be key to this process.

“For years, we struggled to find other Poitou in the U.S., as well as reliable resources regarding Poitou husbandry,” Archer said. “The census will give us a much better handle on breed numbers in America.  It will be a great starting point to plan for the coming decades using the genetic information collected in the process. We also hope to build a strong coalition of U.S. Poitou owners and work together with The Livestock Conservancy to take an educated approach to future breeding and Poitou husbandry.”

The second step in saving Poitou donkeys from extinction is to develop a breed standard. This means translating the French breed standards into English with translation approval from the French Poitou Breed Association. The breed standard defines the phenotype, or observable characteristics, of ideal Poitou animals, and determines the characteristics necessary to establish an American Poitou studbook, inspection criteria, and breed association membership.

An ancient French breed, the Poitou was historically valued for large mule production. In the U.S., they were used to develop the giant American Mammoth Jackstock breed, another critically endangered donkey that was partially developed by George Washington, as well as improving other donkey breeds. Poitous are critically endangered in both the U.S. and France.

Developed for the specific purpose of breeding with large farm horses called Trait Poitevin Mulassier, Poitou donkeys are both large and tall, with long heads and ears. Poitous stand 14-15 hands (56-60 inches) at the withers (the ridge between the shoulder blades) and weigh 750-950 pounds. They have large feet and muscular bodies with heavy bones. Brown or black, without a dorsal stripe, Poitous are most known for their good nature and long hair, which hangs in cords from their entire body.

The French Poitou breed standard was developed around 1700, and the modern Poitou studbook was established in 1884. In France, Poitous are referred to as Baudet du Poitou. Baudet translates to “sire of mules,” which is distinct from the term “âne” that is common for a donkey. The French mule breeding industry was a highly developed and lucrative enterprise. Poitou jacks were bred to mares to produce mules for both riding and work. While mules were promoted across Europe, the breeding stock was closely held in the Poitou region of France. The breed nearly became extinct after World War II, when the demand for mules collapsed.

The next step in the breed recovery plan is to register American Poitous and put them back to work as mule producers. Registered Poitou donkeys promote genetic authenticity and prevent price gouging or opportunistic animal predators. The Livestock Conservancy met with representatives of Races Mulassières du Poitou in the Spring of 2020 and received their endorsement of the American Census. Centralizing U.S. records with an independent and reputable non-profit organization like The Livestock Conservancy certifies the validity of individual animal documentation for livestock in need of registration in European herdbooks.

“We have chosen to work with The Livestock Conservancy because we cannot successfully ensure the U.S. Poitou survival alone. We are grateful for their expertise in genetics, breed registries, and rare breed husbandry, in addition to their wide reach as a respected organization that preserves and promotes heritage livestock,” Archer said. “We know how amazing this breed is, but to surround yourself with others that share this passion for ensuring U.S. Poitous have a future is exciting and comforting. It is going to take a village to move the needle in a positive direction, and we feel The Livestock Conservancy is the best partner for what we hope to accomplish.”

Future steps in the American Poitou breed recovery process include developing a veterinary foal care protocol, documenting the American history of the breed and master breeders, and creating an American Poitou Breed Association. Archer, Jones, and The Livestock Conservancy hope to present the census findings and future conservation strategies at a Poitou Owners Summit in 2021.

To participate in The Archer/Jones Poitou Donkey American Census, contact The Livestock Conservancy by email at info@livestockconservancy or by phone at 919-542-5704.

Traditional, historic breeds retain essential attributes for survival and self-sufficiency – fertility, foraging ability, longevity, maternal instincts and resistance to disease and parasites. As agriculture changes, this genetic diversity may be needed for a broad range of uses and opportunities. Once lost, genetic diversity is gone forever.

What Are Heritage Breeds?
Heritage breeds are traditional livestock breeds that were raised by our forefathers. These are the breeds of a bygone era, before industrial agriculture became a mainstream practice. These breeds were carefully selected and bred over time to develop traits that made them well-adapted to the local environment and they thrived under farming practices and cultural conditions that are very different from those found in modern agriculture.

Heritage animals once roamed America’s pastoral landscape, but today these breeds are in danger of extinction. Modern agriculture has changed, causing many of these breeds to fall out of favor. Heritage breeds store a wealth of genetic resources that are important for our future and the future of our agricultural food system.

Support for the livestock industry amidst marketplace challenges
October 14, 2020