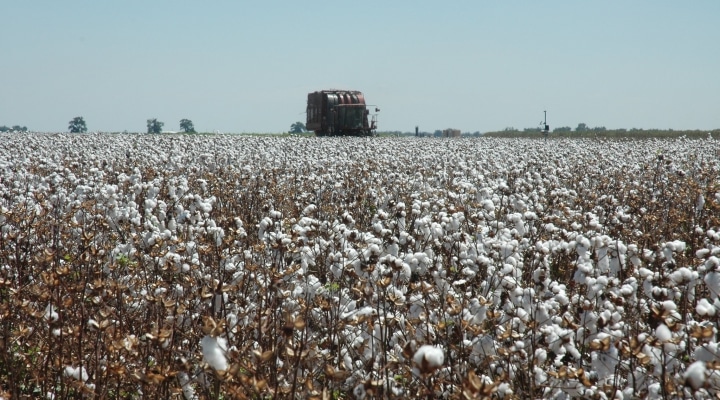 Cotton’s path seems on more solid footing in recent weeks. Given the present fundamentals, the market has clearly established a current objective top at near 90 cents. It looks like there’s currently plenty of support at 84. (photo by AgriLife Today, creative commons/flickr.com)

TIFTON, Ga. — Prices continue to show strength. New crop December futures closed today at 88.16 cents—the highest in a month and topping 88 cents for the third time near the contract high.

Cotton’s path seems on more solid footing in recent weeks. Given the present fundamentals, the market has clearly established a current objective top at near 90 cents. It looks like there’s currently plenty of support at 84.

There are several factors in play—some bullish and some bearish. Despite recent strength, there are bearish undertones that could eventually take prices to nearer the support level.

The consensus within the industry was that due to weather, high prices for competing crops, and other factors, actual planting could be less than intentions. Industry expectations were that acres would be down more than the June 30 number indicated. Planting will be firmed later based on FSA acreage reports.

Should crop conditions continue favorable, yield could increase, harvest acres increase, and the US crop increase. But assuming marketing decisions have been such, what producer would not like selling a large crop for better than 80 cents average?

Last weeks export report (for the week ending July 1) showed sales of 59,200 bales and shipments of 323,400 bales. Sales and shipments were both up from the prior week. With approximately 4 reporting weeks left in the 2020 crop marketing year, shipments need to average roughly 325,000 bales to reach USDA’s estimate of 16.4 million bales for the year.

Cotton is also being pushed and pulled by the corn and soybean markets, the weather, the value of the dollar, and threats from the Delta variant. With a potentially larger US crop in the making, we certainly don’t need anything to disrupt strong demand.