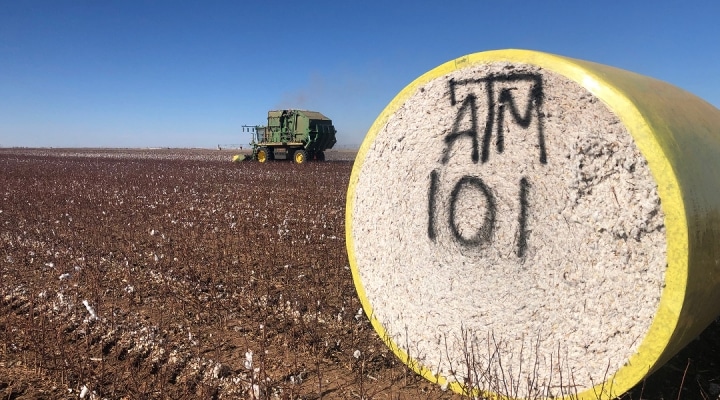 COLLEGE STATION, Texas — As cotton producers across the Texas High Plains begin preparing for a new season, Texas A&M AgriLife Extension Service specialists are providing up-to-date information on the performance results of commercially available varieties across the state during 2020 trials.

Combined South Plains and Panhandle results can be found on the Texas A&M College of Agriculture and Life Sciences Department of Soil and Crop Sciences Variety Testing site.

In the South Plains, the 2020 season was riddled with challenges in the field, from start to finish. Lack of rain was the main bottleneck, said Murilo Maeda, AgriLife Extension cotton specialist, Lubbock. With warmer temperatures early in the spring, some farmers planted early. What little moisture was available then, however, didn’t make it very far.

The lack of adequate planting moisture resulted in a great percentage of dryland fields failing to obtain a good plant stand, if they emerged at all. Those with access to irrigation fared much better overall, but producers also struggled in places where water availability was limited.

In-season precipitation was scarce and tended to favor areas east of Interstate 27. A cold front early in September and a two-day ice/snow event in late October closed out the season in style. Those weather events impacted overall fiber quality and caused some cotton to fall to the ground.

A June 9 windstorm affected cotton acres across the entire region resulting in blown-out fields or severe crop injury and delayed development. June and July temperatures ranged from 95-108 degrees. Timely precipitation in July coincided with the bloom period across most northern Panhandle sites, but many precipitation events were coupled with hail. Hot and dry conditions in August increased crop water demands.

In September, an early cold snap delivered temperatures below 40 degrees for 10-20 hours depending on the location. A low of 34 degrees was reached at the Dallam County trial. This weather event negatively impacted micronaire development across the northern Panhandle. An early October ice storm was the final terminating event for regional cotton fields.

As a result of cumulative in-season stress, lint yield and grades were negatively impacted at most northern Panhandle trials. Two locations were terminated because of hail injury.

The World Agricultural Supply and Demand Estimates report from January 2021 indicated a near 1 million bale reduction in the 2020 production estimates nationwide, to 15 million bales, due to a 500,000-bale decline in the Texas crop. The same report indicated the upland season-average price received by U.S. farmers is projected 3 cents higher, at 68 cents per pound.

According to the National Cotton Council, Texas growers intend to seed 6.4 million acres of cotton this season. Despite representing a 5.7% reduction in acreage compared to last year’s 6.8 million acres, this still represents approximately 55% of the estimated 11.5 million cotton acres for the entire nation.