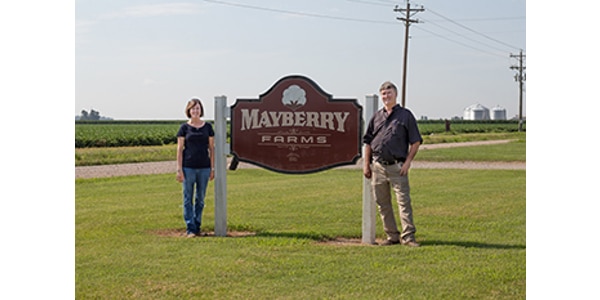 Together, siblings Keith Mayberry and Kim Mayberry-Holifield work together to ensure the 4th generation of their family farm continues a tradition of raising cotton. (Courtesy of Missouri Department of Agriculture)

JEFFERSON CITY — Together, siblings Keith Mayberry and Kim Mayberry-Holifield work together to ensure the 4th generation of their family farm continues a tradition of raising cotton. Standing on the same land that their grandfather purchased in the 1940s, they explained how their partnership as brother and sister sustain and innovate their farm.

Keith Mayberry farms the land on a day-to-day basis, while Kim Mayberry-Holifield uses her background in agronomy to make input decisions for their crops.

“To walk this piece of ground that our grandpa walked, it’s a reminder that farming is a great way of life,” said Kim Mayberry-Holifield. “You get to be your own boss and work the land that you inherited from your father and grandfather. To me, there’s no greater joy in the world.”

Today, three generations of Mayberrys farm together, with their Dad serving an active role as the farm’s patriarch. Since the beginning, they’ve been driven by a desire to take care of their land and leave it in better shape each year.

“I want consumers to understand that we are stewards of the land,” said Kim Mayberry-Holifield. “Keith is going to pass this on to his children. It’s our job to take care of it while we’re managing it.

Cotton, Kim Mayberry-Holifield said, can be an extremely misunderstood crop. She said its reputation as a “water hog” is inaccurate, pointing out that cotton is actually a desert crop. As a team, they work together to implement moisture sensors that gauge each field’s individual water need and help them time irrigation. In the end, it’s all about water conservation on their farm.

“Water is a valuable resource and becomes more valuable every day,” said Keith Mayberry. “In Southeast Missouri, we have an abundance and we want to keep it that way. We don’t want to waste it. Scheduling irrigation is one way that we can save as much water as we can.”

Although their farm raises a variety of row crops, the Mayberrys still feel drawn back to their connection with cotton.

“For most of the farmers in the Bootheel, cotton is an emotional crop,” said Kim Mayberry-Holifield. “Ever since I remember, there has been cotton on this farm.”

“Like she said, cotton has a personality,” said Keith Mayberry. “When you walk in the field, cotton is always changing and doing something different.”

No matter which hat Keith Mayberry or Kim Mayberry-Holifield are wearing for the day, they take pride in continuing what those before them started.

“We take great pride in feeding and clothing the world,” said Kim Mayberry Holifield. “As a farmer, it’s in your blood until the day you die.”

Missouri growers are sweet on honey of a berry