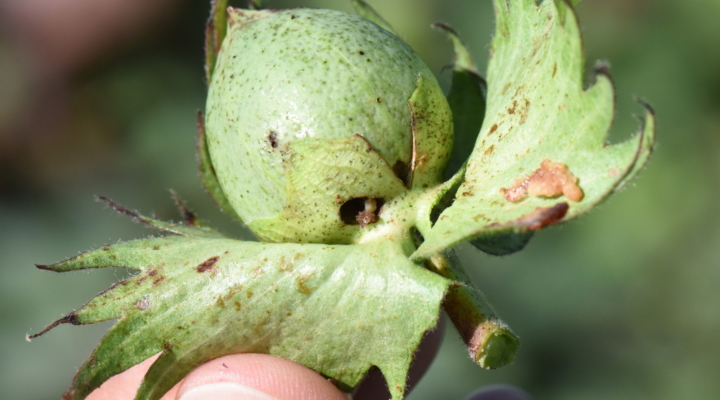 “I haven’t come across any significant bollworm activity in the region yet,” said Dr. Suhas Vyavhare of Lubbock. “But blooming cotton coupled with new growth following recent rains in our area makes for an especially enticing combination for bollworm moths seeking egg-laying sites. So it’s important for growers not to let their guard down.”

Vyavhare’s warning was prompted by reports from South Texas of the pest breaking Bt shields there and in other parts of the country. He said treatable levels of bollworms, also called headworms when they affect sorghum, have been spotted in some South Plains sorghum fields.

“I wouldn’t rush insecticide applications on Bt cotton just because bollworm eggs are present or worms less than a quarter inch are found, because they have to feed on the plant for the genetic technology to work,” he said. “Similarly, I wouldn’t pull the trigger and spray non-Bt cotton based on egg lay, as natural controls often help keep bollworm numbers in check. It’s always best to give the Bt trait technology and the beneficial insect predators a chance to work their magic first.”

That’s not to say growers should become lax in scouting for cotton pests, but boll damage and the presence of live bollworms should be taken into account before making decisions on whether to apply insecticide, he said.

“The threshold to apply insecticide is when 6 percent of the bolls, post bloom, are damaged with live worms present,” he said. “Some of the old data indicates pyrethroid insecticides may still work against cotton bollworms, though we have no recent susceptibility data available from the High Plains region.

“The diamides, trade names Prevathon and Besiege, are the most effective. Besiege contains both a diamide and a pyrethroid, so it would be the better choice if stink bugs are present too. If stink bugs aren’t an issue, Prevathon is a better option, as it’s always good to avoid unnecessary pyrethroid applications, because they also kill beneficial insects that otherwise could keep secondary pests such as aphids and spider mites at bay.”

Overall though, Vyavhare said the cotton crop looks good, though there is a wide range of cotton in different growth stages out in the fields.

“Early planted cotton fields are in bloom while some of the late or replanted cotton is a little behind,” he said. “Overall though, insect pest pressure remains light across our region.”

Cotton farmers adjusting in wake of ruling on dicamba
June 14, 2020