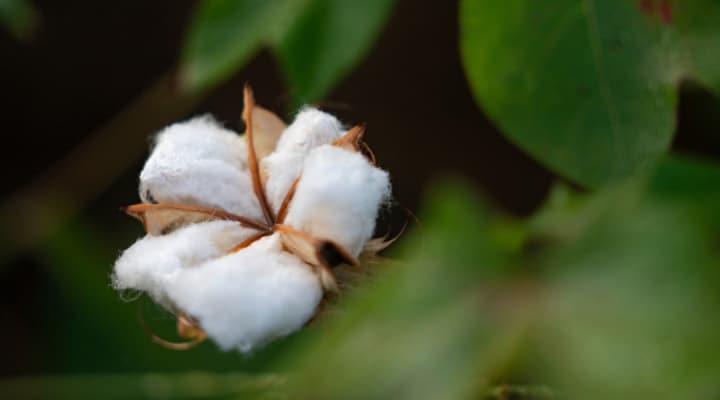 Cotton prices are much higher than this time last year and could present good selling opportunities for producers. (Texas A&M AgriLife photo by Laura McKenzie)

COLLEGE STATION, Texas — Cotton futures rose rapidly over recent weeks as speculators began buying for potentially big profits based on expectations that prices would go up, according to a Texas A&M AgriLife Extension Service expert.

The rally has been good for Texas cotton growers who have negotiated prices during the rally or who still have cotton to sell, said John Robinson, Ph.D., AgriLife Extension cotton marketing economist, Bryan-College Station. But he suspects the spike in buying and climbing prices is nearing the end.

Robinson said the cotton price rally started three weeks ago when it became clear prices would be up and the number of futures contracts held by long speculators were targeting cotton. The speculative buying pushed prices higher, but he said it is unclear what negative cropping and production factors were pushing futures purchases.

Issues pushing the price increase could be rain in the U.S. Cotton Belt or problems with cotton crops in India or production issues in China, including import bans for cotton produced by Uyghur minorities in slave labor camps in northwestern parts of the country.

But those factors alone should not be enough to cause the 25-cent per pound price jump over the three weeks from the 80-cent to 90-cent per pound range to $1.14 per pound for December futures. Robinson said conditions are bullish for cotton with strong demand, but the supply side and what is creating the strong demand are less clear.

Robinson said there is evidence for strong demand related to large buys of U.S. cotton based on the Phase 1 trade agreements that reduced or removed tariffs from the trade war with China.

Export demand for U.S. cotton triggered a 45-cent rally that took per-pound prices from 50 cents on April 1, 2020, to 95 cents by March 2021. That sustained price rally was driven by a global textile manufacturing ramp-up as mills reopened or increased capacity following initial COVID-19-related shutdowns.

“This week is the third week of the rally and there has been some selling,” he said. “So, this may be the top of the rally, but it is hard to predict based on what might be driving it to begin with. These speculators can unpredictably sell to take their profits or out of fear that the price could drop.”

Around two-thirds of Texas cotton is sold through a cooperative that pools their supplies and negotiates the best prices for members throughout the year. Cash offers are available to those with unsold cotton in the field or who have bales at gins that could fetch premium prices based on lint quality and grades.

Many independent growers who locked in prices around 85 cents per pound may have seller’s remorse, but Robinson said they still did well.

“The pricing opportunities are there for growers who have unsold cotton,” he said. “Hopefully they have good yields and can take advantage of this rally. It is a good year for them to pay off debt, invest in their operation and save some money, especially producers who have had a tough couple of years.”

Robinson said there are ways for producers to begin planning for marketing their commodities and protecting their operation from the downside of potential prices in 2022. AgriLife Extension’s Master Marketing workshops focused on cotton provide information and education on how to maximize price opportunity and hedge against potential losses.

Despite some reports, Robinson said higher cotton prices are not the reason consumers may see higher prices on cotton-dependent clothing and apparel. The 25-cents-per-pound rally may translate into millions of dollars to buyers and sellers of raw cotton but does not add that much to the cost of a t-shirt or a pair of jeans.

“The raw material is only a small part of the cost to create and market these products,” he said. “Manufacturing, shipping, labor and branding are all likely adding more to product costs compared to cotton. Fuel prices are higher. There are fewer trucks moving products and any disruptions to get finished products to market also add to the end cost to consumers.”

After three years, man behind bars in case of stolen bull