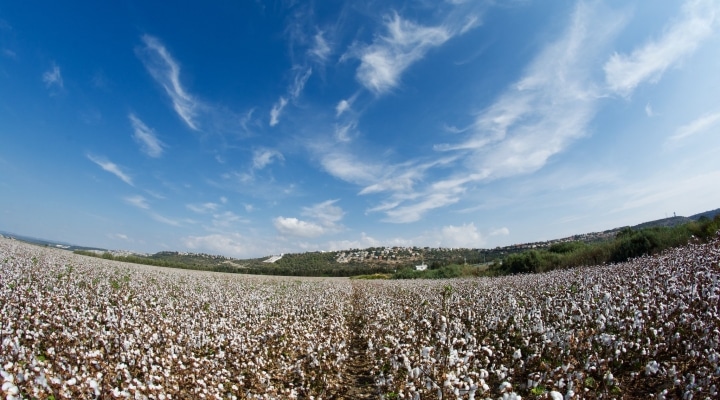 Cotton prices (nearby December futures) have now trekked into territory that no one thought possible a few months ago. Not now, not this soon. December futures now approaches 72 cents and has thus far gained 2.02 cents for the week, 6.15 cents for the month of October, and 21.53 cents since the horrible low back on April 1. Talk is now already circulating of 80 cents. (photo by yoram elem, Creative Commons/flickr.com)

Cotton prices (nearby December futures) have now trekked into territory that no one thought possible a few months ago. Not now, not this soon. December futures now approaches 72 cents and has thus far gained 2.02 cents for the week, 6.15 cents for the month of October, and 21.53 cents since the horrible low back on April 1. Talk is now already circulating of 80 cents.

Particularly in recent weeks, prices have moved higher due to several factors including
1-the increasing likelihood that the US crop is going to get smaller
2-delays in harvesting; impact on yield and quality
3-signs and confidence that Use/demand is on the rebound
4-“technical considerations” and speculative buying
5-a weaker dollar that makes US exports cheaper
6-expectations and news circulating that production may also decline in other key countries.

The market will continue to watch USDA’s weekly crop condition and progress report and weekly export figures. USDA’s next monthly crop production and supply/demand projections will be out on November 10th.

Since the April low, this market has had 7 short-lived “uptrends” and each one of those was followed by some amount of “correction” down. It’s been a choppy, roller coaster trend from April until now. On earlier trends and improvements in price, it was noted that the 65 to 67 cents area and later the 68 to 70 acre were both good price risk management opportunities worth considering at the time.

The current uptrend from roughly 67 to almost 72 cents now has been swift (too swift?) and has yet to be challenged by any efforts to adjust or correct downward. But this uptrend could now face strong resistance at 72 to 73 cents. This is a major, major hurdle that will have to be negotiated. Does the market have enough bullishness left to push through 72-73?

The advance in futures prices is being met with a weak basis. So, that takes some of the shine off this glittering recovery. To me, the weak basis is a signal that buyers are not fully comfortable with these higher prices and finding a home for the crop at these prices. According to USDA-AMS, the basis in the Southeast, for example, is -275 December for 41-4/34 and -50 for 31-3/35. I can’t remember the last time we had a negative basis for a 31 grade.

October 22nd, good export report provided support for the trend in prices and confidence in Use. Shipments were down slightly from the prior week but 48% of shipments were to China. Total sales were the 2nd highest so far this marketing year and sales with destinations to China were the highest in 3 weeks. Pakistan was a big buyer along with China, Mexico, and Vietnam.

This advance beyond 70 cents shouldn’t be ignored. The market should have support at 68 but that’s almost 4 cents below where we are now. Do you want to risk that in hopes that price keeps going higher? What’s your strategy? You should consider how to take advantage of this run but leave opportunity to do better if prices move higher and also limit losses if a “correction” happens.

Virtual Beekeeping Institute will offer educational resources for apiarists
May 11, 2021

CAES convocation ceremony will remain virtual for spring
May 10, 2021