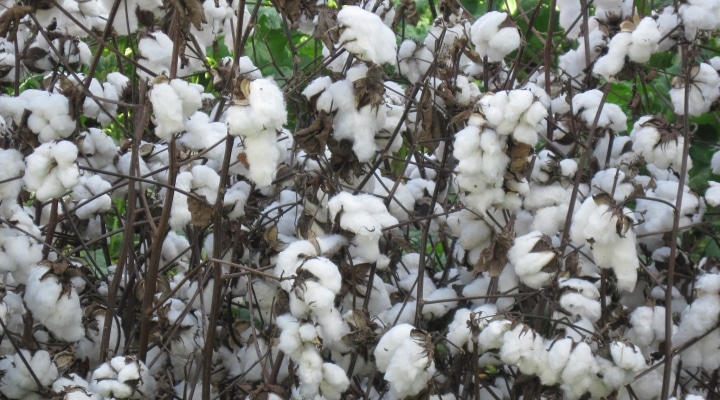 Since the peak at near 88 cents a little over a month ago, new crop December futures has since dropped 9 cents—and that’s thanks to a 200 point rebound today!  Prices (December futures) had closed down 6 straight days and 7 of the last 10 days before today’s triple digit rebound. (photo by Gloria Cabada-Leman, creative commons/flickr.com)

TIFTON, Ga. — The economic and market fundamentals have not changed all that much, if any.  Yet, cotton is now struggling to somehow maneuver its way back to 80 cents.

Since the peak at near 88 cents a little over a month ago, new crop December futures has since dropped 9 cents—and that’s thanks to a 200 point rebound today!  Prices (December futures) had closed down 6 straight days and 7 of the last 10 days before today’s triple digit rebound.

“Support” at 80 cents has now been compromised which, technically, opens the door for price to move lower.  But, after yesterdays near 400-point meltdown, todays 219 point recovery is a good sign that maybe further decline will not happen.  As I already pointed out, the market fundamentals remain good.

USDA’sProspective Plantings survey-based report of what farmers say they intend to plant this year, will be out next week on Wednesday, March 31st next week.  Given this recent decline in price, the numbers could be of questionable value and impact on the direction of the market.

The survey was taken while December futures was still 80 to 85 cents.  USDA’s acres planted estimate presented during the Outlook Forum in February was 12 million acres.  Industry projections have been mostly 11.5 to 12.5 million acres—those estimates affected somewhat by recent lower prices.

There’s probably no denying that price below 80 cents changes things.  It’s just a matter of how much and, given we’re now getting into April, how much of planting decisions can and can’t be changed at this point.  This will obviously vary from area to area and farm to farm.

New crop cotton has declined 9% for the month of March.  Corn and soybeans have been level to down just slightly.  So, price-wise, cotton has lost ground.  Also, peanut contracts have increased to compete with cotton.

This week’s export report (for the previous week ending March 18) was good but not fantastic.  Sales were 286,500 bales, Vietnam the largest sales destination.  Shipments were 332,500 bales with top destinations China Pakistan, Bangladesh and Vietnam.

The report was good, but apparently was not good enough to keep the market from closing down almost 400 points on Thursday.  Perhaps the report figured in to the market’s rebound today.

USDA’s April supply/demand numbers come out on Friday, April 9th.  I have read of some concerns beginning to surface that demand/Use could be weakening due to increasing COVID numbers.  If prices are to recover back over 80, USDA’s monthly numbers must continue to show growth in Use and this must be confirmed by good weekly exports.

The drought outlook for Texas is not good.  If acres planted end up below 12 million and if weather concerns mount and particularly if the outlook for Use is good, these fundamentals should support prices at current levels and higher.