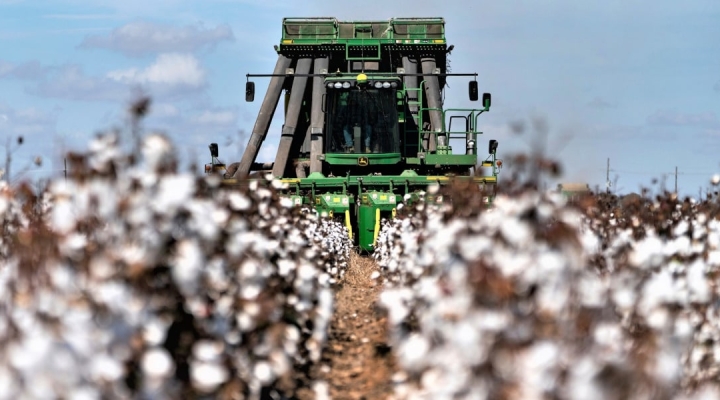 COLLEGE STATION, Texas — Decades of collaborative research and scientific advancements have helped Texas cotton be the economic and industrial force it is today.

Texas A&M AgriLife has a long-standing track record of teaming up with the cotton industry and federal agencies to solve some of the most pressing issues facing this important part of the Texas economy. A cotton-related project in the Texas A&M Department of Entomology illustrates this collaborative approach.

Scientists in the department received a matching grant of almost $150,000 from both the U.S. Department of Agriculture National Institute of Food and Agriculture, NIFA, and the Cotton Board, a commodity group that represents thousands of growers around Texas and the U.S.

The three-year project, Modifying Terpene Biosynthesis in Cotton to Enhance Insect Resistance Using a Transgene-free CRISPR/CAS9 Approach, has received $294,000 to research novel pest management tools for cotton production. If successful, these advances could ultimately provide positive cost-benefit results that ripple through the economy and environment.

The goal is to essentially silence genes in cotton that produce monoterpenes, chemicals that produce an odor pest insects home in on, Sword said. By removing odors that pests associate with a good place to feed and reproduce, scientists believe they can reduce infestations, which will in turn reduce pesticide use and improve profitability.

Sword is collaborating with Anjel Helms, Ph.D., a chemical ecologist and assistant professor in the Department of Entomology; Michael Thomson, Ph.D., AgriLife Research geneticist in the Department of Soil and Crop Sciences and the Crop Genome Editing Laboratory; and graduate student Mason Clark.

This research team is working on a project that was “seeded” by Cotton Incorporated, the industry’s not-for-profit company that supports research, marketing and promotion of cotton and cotton products.

The seed money allowed the AgriLife Research team to create a graduate position for Clark and produce preliminary data that laid the foundation for the NIFA grant proposal, Sword said. In addition, the terpene research is part of larger and parallel projects that began with direct support from Cotton Incorporated.

“Cotton Incorporated’s support has been absolutely critical to jumpstart the project from the beginning,” he said. “From a scientific standpoint, industry support and collaboration are vital to project success, whether that’s leveraging money for research or identifying, focusing on and solving a problem, which actually helps producers.”

“Cotton Incorporated is one of our long-time partners, and that collaboration has made an enormous impact on individuals, farming operations, communities and the state,” Savell said. “This project is just one example of how we can do more by engaging with the producers we serve.”

Bill Gillon, president and CEO of the Cotton Board, said projects supported by the Cotton Board and Cotton Incorporated have run the gamut of production, including reducing plant water demands, increasing pest and disease resistance, and improving seed and fiber quality.

Cotton Incorporated scientists typically identify a need or a vulnerability and create and prioritize topics for potential projects. These projects are developed in coordination with agricultural research programs that will either be directly funded by the group or could be submitted to funding agencies for competitive grants. The Cotton Board reviews project proposals and approves them for submission to NIFA for competitive grant dollars.

The Cotton Board’s Cotton Research and Promotion Program has generated more than $4 million in competitive cotton research grants from NIFA over the past three years, Gillon said. When coupled with $1.35 million from the Cotton Board, the program has generated $5.4 million in agricultural research funding for projects critical to improving productivity and sustainability for upland cotton growers in the U.S.

“We value our long-standing relationship with Texas A&M and other institutions across the Cotton Belt because the work would not be done without their expertise,” he said. “We certainly view this as a partnership and want to support their land-grant mission and help researchers maintain their capabilities, programs and labs that continue to produce results critical for cotton producers and agricultural production.”

Research to improve a plant’s ability to tolerate or resist pest insects and diseases via breeding programs is nothing new, especially for a publicly funded land-grant university research project, Sword said. However, editing genomes in plants and pest insects is a relatively new but rapidly advancing methodology.

Sequencing genomes of interest and using the gene-editing tool CRISPR have become increasingly viable ways to identify and influence plant or animal characteristics.

However, using gene-editing technology to remove a characteristic to make plants more resistant to pests is novel, Sword said. The research could be the genesis for a giant leap in new methodologies designed to protect plants from insects and other threats.

Phillip Kaufman, Ph.D., head of the Department of Entomology, said an overarching goal for his department is addressing relevant topics or concerns, from public health to agricultural production. Whether research meets the immediate needs of producers or lays the foundation for breakthroughs in coming decades, many agricultural research projects’ relevance is guided by producer input.

Industry buy-in is critical to entomology research, he said. Topics relevant to commodities, in this case, cotton, and the public’s interest, in this case, NIFA, is a good representation of how the land-grant mission delivers for producers but can also ripple through communities, the economy and the environment.

“This grant project is a good example of how cotton producers, the gins and other elements of their industry effectively tax themselves to fund campaigns and research that adds value to what they produce,” he said. “It also shows the motivation from a public dollar perspective to invest in research focused on providing pest control methods that reduce chemical use.”

Sword’s gene-editing project aims to expose and exploit simple but key ecological interactions between plants and insects that could help protect the plant.

“Insects are perpetually evolving resistance to whatever we throw at them,” Sword said. “So, it’s important that our tools continue to evolve. That can only be accomplished through a committed and concentrated effort that is steered by land-grant institutions, the scientists and producers.”