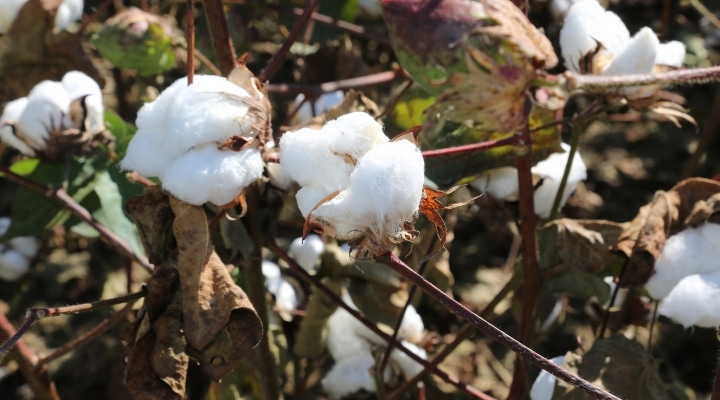 USDA numbers were an unfavorable surprise to the market. Prices fell as a result. Today’s production numbers were based on conditions as of August 1. The numbers do not reflect events, good or bad, after that date until now. September and subsequent reports will offer revisions. (photo by UGA CAES/Extension, Creative Commons/flickr.com)

TIFTON, Ga. — USDA numbers were an unfavorable surprise to the market. Prices fell as a result. Today’s production numbers were based on conditions as of August 1. The numbers do not reflect events, good or bad, after that date until now. September and subsequent reports will offer revisions.

Earlier this week, it was reported that crop conditions as of August 9th were down from a week earlier. The market (Dec futures) reacted up over 100 points from last Friday’s disastrous day. Today, however, Dec dropped 129 points— wiping out those gains and actually closing below last Friday.

The US crop is now projected at 18.08 million bales—roughly 1⁄2 million bales higher than the 17.5 July estimate. Harvest acres were decreased 1 million acres compared to July but the US average yield was bumped up over 100 lbs to 938 lbs per acre. As we have mentioned previously, given the weather issues that have plagued a large portion of this crop, an August number above 17.5 million bales would likely weaken prices.

Acres planted are subject to further revision but based on the June estimates and if that number holds, Texas abandonment looks to be a whopping 42%; US at 24% determined largely by what happens in Texas. The projected US yield of 938 would be a new record- surpassing 2017. Nine states are projected to average 2 bales or more per acre. The projected state average yield of 774 for Texas would be the fourth highest ever and well above average. Large abandonment takes out a lot of dryland and low- yielding acres resulting in a higher average yield.

Exports for the 2019 crop year were raised to 15.4 million bales— from 15 million in June to 15.2 in July and now to 15.4. As of July 30 (with just 1 day remaining in the 2019 crop marketing year), export shipments were 14.614 million “running bales”. Assuming these bales weigh a “typical” 495 lbs, this would be equivalent to 15.07 USDA “statistical” 480-lb bales. For shipments to total 15.4 million 480-lb “statistical” bales, a “running bale” must be averaging 505 lbs. In other words, shipments were not on pace to meet USDA projections, and certainly not the increase to 15.4, unless weights were running more than “typical”. So, the increase to 15.4 may not reflect more shipments, just more lbs shipped.