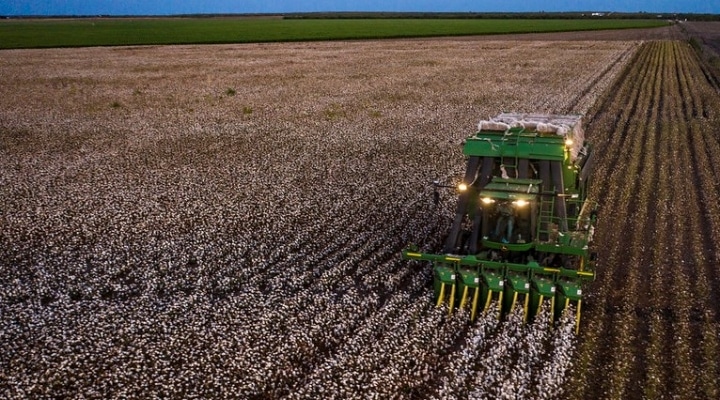 After closing at over 72 cents earlier on Monday this week, December futures has now declined 3 consecutive days. Dec closed below 70 cents today for the first time since October 16—in almost 2 weeks. (Stock photo via U.S. Department of Agriculture, Public Domain)

TIFTON, Ga. — The trend to even higher prices may not be over, but it has hit a snag—as expected.

After closing at over 72 cents earlier on Monday this week, December futures has now declined 3 consecutive days. Dec closed below 70 cents Thursday for the first time since October 16—in almost 2 weeks.

Prices are going through an adjustment. Do not panic although hopefully growers took advantage of the run and moved up their pricing on 2020 production. There should be support at 68 and we could yet make another run.

Monday’s close this week above 72 was the highest the market has been since mid-January. Dec gained 137 points last week and another 82 points on Monday this week. Prices have advanced most recently due to the expected but unknown impacts of Hurricane Zeta, cold temps and snow and ice on the Texas Plains, and encouraging export reports.

Concerns continue to mount over yield and fiber quality. As of October 25, the Alabama crop was well behind average at only 34% harvested, Mississippi was behind at 63% harvested, Louisiana 87%, and Texas 48%.

USDA’s November projections will be released on Tuesday, November 10. The cotton crop is currently projected (the October estimate) at 17.05 million bales. Guestimates are that the crop could be reduced somewhere in the neighborhood of 300,000 bales and maybe more. It may even be December before a more accurate reading is available—particularly if adverse weather events keep occurring.

The market (Dec futures) has thus far lost 229 points this week since Monday’s close over 72. This included a 186 point drop yesterday (on Wednesday). The decline and “setback” this week has been caused by 1-declines in the stock market, 2-increasing concerns of another economic slowdown and partial shutdown due to increasing COVID numbers, and 3-selling and “profit taking”.

This week shows us how volatile and uncertain this market is. It shows that even with crop concerns and even with good export numbers, demand side uncertainties can bring prices down. The market could work a little lower but should have some support at 68 to 69. The market is already expecting a smaller US crop. So if a smaller crop is realized, the market may not react to that unless the cut is more than expected. Prices can still work back higher but it will take that smaller crop and renewed optimism and confidence on the demand side.