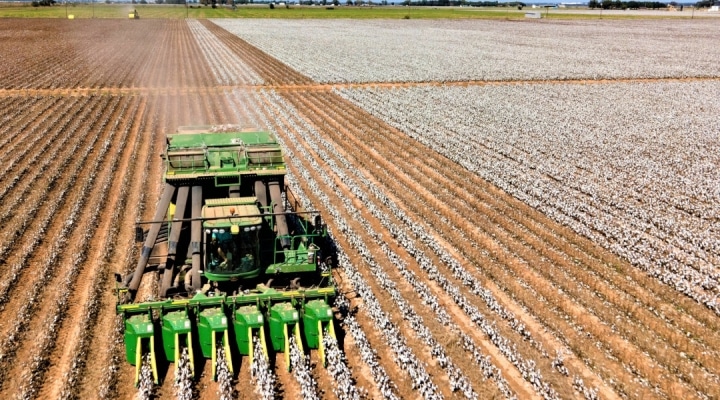 Cotton being harvested during the 2021 season. (Texas A&M AgriLife photo by Courtney Sacco)

COLLEGE STATION, Texas — Cotton planting is underway, and Texas acres are expected to be up amid good prices and lingering drought conditions.

Both McKnight and Robinson expect around 7 million acres of cotton could be planted in Texas.

Early grower surveys forecast up to 12.5 million acres of cotton to be planted in the U.S., Robinson said. That would represent a 6.8% year-to-year increase compared to the 11.7 million acres planted in 2021.

For some perspective, the U.S. Department of Agriculture reported 13.7 million acres of cotton were planted in 2019, before the pandemic curtailed demand.

McKnight said cotton plantings in the Rio Grande Valley should begin to ramp up next week. Planting in other regions of the state will move north as soil temperatures consistently reach above 60 degrees.

“When soil temperatures are warmer, in the 65-70 degrees range, it cuts the time it takes to get a good stand,” he said. “Last year, in our test plots, we had a cold front that dropped air temperatures into the low 40s after planting, and you could really tell the swing impacted cotton emergence.”

Soil temperature will guide early planting, but soil moisture will also be a major consideration for planting dates and could help producers decide what crop to plant, McKnight said. On one hand, increasingly dry conditions and a continued La Niña weather pattern could drive producers away from corn to more drought-tolerant crops like cotton.

But cotton fields need adequate soil moisture to emerge and survive much less yield at harvest, he said. Much of the Lower Rio Grande Valley is irrigated, as is the High Plains, but prolonged drought conditions are a concern for dryland producers in West Texas and the Texas Plains.

“The drought monitor map is showing dry or droughty conditions in a lot of the state,” McKnight said. “Weather will play a big part in how the crops perform, but going into planting, it could also play into growers’ decisions on what to plant.”

McKnight and Robinson said commodity prices and input costs will also weigh into planting decisions. If there is flexibility in crop rotation decisions, the price of nitrogen fertilizer could shift corn acres to cotton.

“Corn takes more moisture and more nitrogen, so both of those things reinforce planting more cotton under these conditions,” Robinson said.

Cotton futures prices have been hovering for weeks at relatively high levels, between $1 and $1.05 per pound, Robinson said. Corn prices have also been high – around $5.70 per bushel. If there is a choice to be made, Robinson suspects corn could lose acres to cotton or other crops in areas of the state with viable options.

Soybeans could be an option for some acres, he said. The crop requires the least amount of inputs,is drought tolerant, and is experiencing similar high prices. But soybeans are best suited for cropping east of Interstate 35.

Robinson said there is a price incentive to get crops in the ground and insure them to hedge against losses.

“Last year it was dry and then rains started in May,” he said. “There were some early acres that failed and had to be replanted, but October was perfect, and it all lined up to make a good year for cotton growers. The official cotton crop insurance price is going to average around that $1 to $1.05, so the incentive is to plant, insure the crop, and see what happens.”