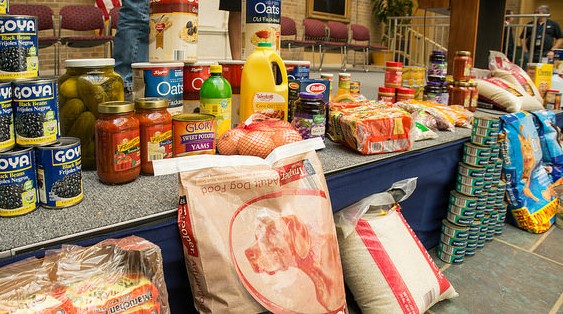 Food bank CEO Andrew Schiff said even though Rhode Island is experiencing economic prosperity and low unemployment, the number of people served by their network of food pantries hasn't dramatically dropped because of the high cost of living in the state. (U.S. Department of Agriculture, Public Domain)

PROVIDENCE, R.I. (AP) — The cost of food in Rhode Island has increased by 15 percent over the past two years, outpacing wage growth, the Rhode Island Community Food Bank said Monday.

The food bank released its annual report on hunger to coincide with Thanksgiving week.

Food bank CEO Andrew Schiff said even though Rhode Island is experiencing economic prosperity and low unemployment, the number of people served by their network of food pantries hasn’t dramatically dropped because of the high cost of living in the state.

“We’re seeing this gradual decrease, which is good and expected given that the economy is better, but it’s still much higher than just before the recession,” he said. “You would’ve expected that by now, it would’ve gone back down, following the exact same pattern as unemployment.”

That hasn’t happened because of rising food prices, Schiff said.

Rhode Island’s unemployment rate ticked down to 3.8 percent in October, reaching its lowest point in nearly 30 years. The jobless rate in Rhode Island was one of the worst in the nation during the recession, reaching peaks of more than 11 percent from 2009 to 2011.

Wages for employees in nonsupervisory roles have increased nationally by 5 percent since 2016, according to federal statistics.

The food bank is asking members of the state’s congressional delegation to oppose any cuts to the Supplemental Nutrition Assistance Program, as they have in the past. Congress is working to pass a farm bill that includes the nutrition assistance program.

The food bank is also asking for additional state funding. It’s encouraging state lawmakers to raise the minimum wage and asking the governor to support a program for people to use their nutrition assistance program benefits at farmers markets.