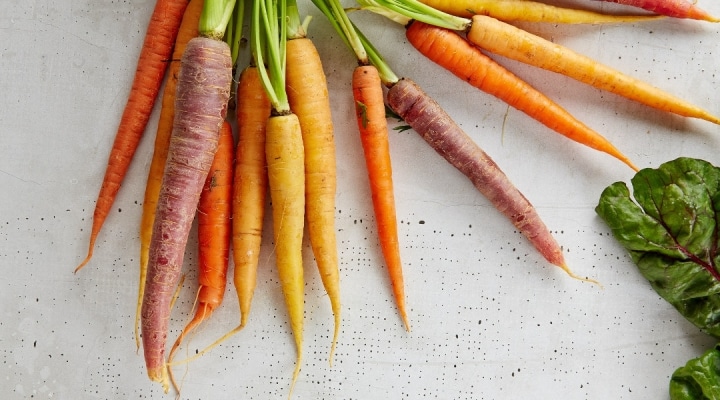 ARS and university researchers are studying ways to bolster helpful soil microbes that can naturally protect carrots from disease. (Photo by Gabriel Gurrola on Unsplash)

WASHINGTON — Carrots, while in the ground, are home to a community of microorganisms, some members of which wage a kind of battle for supremacy against others that cause plant disease and costly losses to farmers who grow the vegetable.

Now, a team of university and Agricultural Research Service (ARS) scientists has begun to identify some of these “good guy” microbes. Reported in the June 2020 issue of PLOS One, the findings provide a critical step toward learning how carrot growers could enlist these beneficial microbes as an effective defense against diseases like Alternaria leaf blight.

One clue to emerge is soil-building practices that allow the microbes to colonize carrots, protecting them from attack. Another tantalizing clue is the genetic makeup of the carrot varieties themselves, which may predispose them to being colonized.

Threatening that farm-to-table supply, however, is Alternaria dauci, the fungal culprit behind Alternaria leaf blight, which occurs in most areas where carrots are grown. Unchecked, the disease causes decay in both the carrot’s distinct feathery  leaves above ground and taproot, below ground, diminishing its yield, quality and marketability.

Fungicide use, rotations with non-host crops and resistant varieties are among tactics used to counter Alternaria leaf blight. However, the potential of bacteria and fungi that peacefully colonize the carrot plant—called “endophytes”—may also have merit, said Philipp Simon, a plant geneticist who leads the ARS Vegetable Crops Research Unit in Madison, Wisconsin.

To learn more, collaborators with Purdue University and the Organic Seed Alliance, together with Simon, evaluated 36 diverse commercial carrot varieties and breeding lines for their reactions to Alternaria leaf blight in either conventionally managed or organically farmed plots. In the conventional plot, for example, pre-emergent herbicides were applied after the carrots had been planted, while in organic plot, weeds were hand-pulled as needed.

The researchers ranked the severity of Alternaria leaf blight in the carrots on a scale of 1 to 12 and harvested the vegetables. They grew cultures of endophytes from nine of lowest-scoring (healthiest) carrot varieties and identified them using DNA “fingerprinting” methods. They also conducted petri-dish and seed experiments confirming the endophytes’ anti-Alternaria activity.

The researchers plan additional studies to learn more about which mechanisms are at work in carrots and explain these results. They will also conduct more field trials to confirm and expand upon the results observed thus far.