Home / New York / Cornell’s first Laidlaw scholars research, lead
A new user experience is coming! We'll be asking you to login to your Morning Ag Clips account March 1st to access these new features.
We can't wait to share them with you! Read more here. 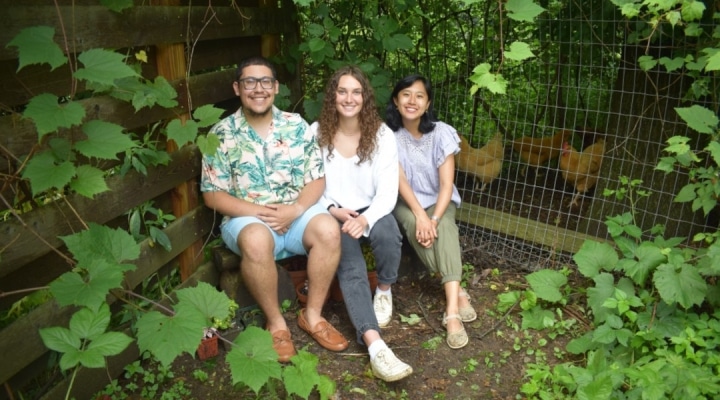 Christopher Betancourt, Melanie Marshall and Maiko Sein worked at the Fallen Tree Center in Ithaca over their first summer of the Laidlaw Scholars Program. (Courtesy Photo)

ITHACA, N.Y. — The Laidlaw scholars at Cornell are diving into a world of research. Over the first summer of the program, 24 Cornellians selected for the prestigious international program completed research projects on topics ranging from migration and big data to entomology, engineering communications and animal science.

Administered by the Mario Einaudi Center for International Studies, the Laidlaw Undergraduate Leadership and Research Program promotes ethical leadership and international research for students at 13 universities, launched at Cornell in April 2021. Einaudi’s faculty connections and international focus connect Laidlaw scholars with mentors, global projects and opportunities for training and support.

Jane Marie Law, professor of Asian studies in the College of Arts and Sciences, mentors three Laidlaw scholars—Melanie Marshall ’24, Maiko Sein ’23 and Christopher Betancourt ’24 —on separate projects that contribute to her research exploring the intersections between religion and ecologically sustainable practices.

“The Laidlaw Scholars Program enabled me to extend my teaching to areas that encompass the work I do outside the classroom,” Law said. Marshall and Betancourt, students in the College of Agriculture and Life Science (CALS), looked closely at issues of food security and food production, while Sein, an architecture student with the School of Architecture, Art and Planning, studied barn houses in central New York.

“I believe that by studying these architectures for storage, how they are built, and what they store, we can learn about the culture and history of the people and places,” said Sein.

Despite travel limitations, Law’s scholars found ways to work collaboratively and get out from behind their computers. While Sein explored the region’s architecture, Marshall searched for insects in the area, creating a pollinator guide. “I intend to design workshops where people can identify their relationship with insects, engage with insects, learn about their importance and learn how to support populations,” said Marshall.

They stayed at the Fallen Tree Center for a Resilient Future in Ithaca over the summer, where they also engaged in Japanese practices, such as “eating with Jihatsu bowls, which is a Zen Buddhist tradition, having chores and Samu (the time we work in silence to complete chores) and meditation 1 to 2 times every day,” said Marshall.

Each scholar presented their work at the Laidlaw scholars research symposium, which also hosted Laidlaw Foundation CEO Susanna Kempe. Betancourt’s poster, “Food Insecurity and Learning about Post-disaster Resilience Strategies in Central New York,” highlighted his focus on sustainability and food security. Working with Mutual Aid of the Finger Lakes and Fallen Tree, he introduced sustainable practices to local residents and volunteered to help disperse food in the region.

Next summer, Marshall, Sein and Betancourt will continue their unique research projects in Japan, applying the research methods they learned in their first summer in a new setting.

Throughout the two-year Laidlaw program, students also complete extensive training from the David M. Einhorn Center for Community Engagement to become ethical leaders, complete a leadership-in-action experience over the second summer, and join a network of like-minded scholars across the globe.

Kobi Rassnick ’24, biological sciences major in CALS, hopes to travel to Massey University in New Zealand for his leadership-in-action experience. Over his first summer, he worked with faculty mentor Heather Huson, associate professor of animal science in CALS, to evaluate the genetic traits of the Cornell training dairy cattle herd. His results confirmed for veterinary students and campus herd managers that their breeding is producing the desired results.

“I think that this result is great, since these are the cattle that produce Cornell’s ice cream and dairy products that we all know and love!” said Rassnick. His research experience has prepared him to connect with local dairy producers in New Zealand, offering resources for cattle breeders to use genetic analysis to optimize the health of their animals, improve production, and increase profits.

Applications are open now to first- and second-year students who would like to join the next cohort of Laidlaw scholars. Apply by January 24, 2022, and attend the upcoming information session for more information.