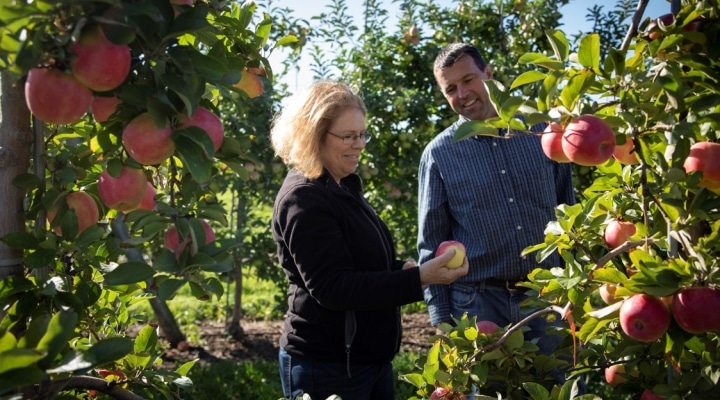 GENEVA, N.Y. — This fall, apple lovers can look forward to three new varieties from the oldest apple breeding program in the U.S. — located at Cornell AgriTech in Geneva, New York, part of the College of Agriculture and Life Sciences (CALS).
70+ apple varieties developed at Cornell since 1880

As an open-release, orchards in New York state and across the U.S. will be able to grow the new varieties without licensing exclusivity. Brown said this gives growers a competitive edge by allowing them to replace older apples with what today’s consumers want — crunch, complexity and a new twist on an American classic.

With Cordera, Brown accomplished a challenging task: breeding an apple that retains both its flavor and texture while also staying scab resistant. Apple scab is a fungal disease that significantly reduces fruit yield and quality, and poses a major threat for New England growers because it’s common in wet springs.

In addition to test plots in orchards across New York state, Wegmans has also been testing Cordera in Canandaigua, New York, for five years.

“Having access to the varieties that Susan Brown and Cornell are working on allows us to look into the future in way that will hopefully expose our customers to new and unique food experiences. For us, disease resistance makes the performance of NY 56 stand out in our orchard. Of course, it always comes down to flavor, and we think it has that too,” said Mark Bowker, orchard crop expert at Wegmans Organic Farm.

Spanish for “lamb,” Cordera was named after Brown’s predecessor, Robert Lamb, and his family. Lamb, who died in 1997, was an apple breeder at Cornell from 1948-88, and met his wife Barbara at Cornell AgriTech (formerly the New York State Agricultural Experiment Station). Now their daughter, Betsy Lamb, M.S. ’81, is an ornamentals coordinator at Cornell’s New York State Integrated Pest Management program.

Brown said it’s fitting that this apple be named in Lamb’s honor since it’s related to the variety Liberty, which he named in 1978 along with Herb Aldwinckle, professor emeritus of plant pathology and plant-microbe biology at CALS.

“Bob would have been thrilled to know this apple variety was named after him and our family,” said Barbara Lamb. “He was passionate about breeding apples and would be thrilled at how successful the apple breeding program is today at AgriTech.”

“NY73 has generated substantial interest at our orchard given how pleasingly different it is from the routine common list of apples,” said John Halsey, owner of the Milk Pail in Southampton, NY. “Some of the visitor comments we have heard are that it has beautiful color, medium to large size making it fun and easy to pick, wonderful mild tart flavor and very smooth enjoyable skin texture.”

Firecracker is being dubbed a “triple threat” – it’s one of few varieties that works well for eating, baking and hard cider production.

“Firecracker has a partial russet skin, and it has a unique combination of acidity and sweetness that produces really complex and evolving flavors,” Brown said. “It’s ideal for anyone who wants to go on a culinary adventure.”

“I started testing this apple and the other new apples in my orchard because I wanted to offer something new, exciting tasting and visually appealing to my retail and u-pick customers. Unique varieties like this help my orchard standout,” said Keith O’Neill, owner of O’Neill Orchards in Lafayette.

With the addition of Cordera, Pink Luster and Firecracker, CALS will have released more than 70 apple varieties since 1880. The most recent varieties from Brown’s breeding program, SnapDragon and RubyFrost, have been highly successful with growers across the state and are also exported to markets in Canada, Israel and Asia.

“Research and thorough testing are crucial in making a really good apple, but that takes a whole team,” Brown said. “Research specialist Kevin Maloney, the Cornell AgriTech Field crew, researchers at Cornell AgriTech and the School of Integrative Plant Science, Cornell Cooperative Extension and the New York apple industry all deserve credit in collaborating to help deliver varieties that support the apple industry.”

Nurseries interested in obtaining a license for the new varieties should contact Jessica Stein, senior licensing and business development officer at Cornell Technology and Licensing at (607) 255-0270 or jessica.stein@cornell.edu.

Consumers interested in trying Firecracker, Pink Luster and Cordera can find them at many orchards in New York state, including, Lagoner Farms in Williamson, O’Neil Orchards in Lafayette, the Milk Pail in Water Mill, Bittner-Singer Orchards in Appleton, Sullivan Orchards in Peru and Mead Orchards in Tivoli.

The best varieties of seedless table grapes to grow in NH
April 13, 2021

How a new malting barley variety for California came to be
April 12, 2021