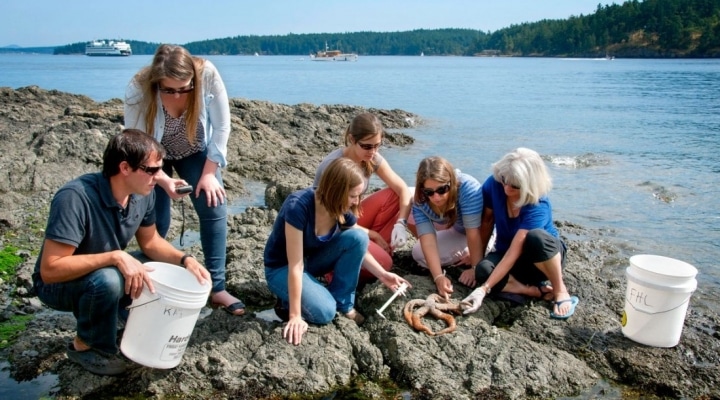 ITHACA, N.Y. — In 2003, David Atkinson ’60 wrote a memo to Susan Henry, then dean of the College of Agriculture and Life Sciences (CALS). In it, he said he had an idea.

Atkinson, a successful financier and CALS graduate, had just been selected to join CALS’ Advisory Council. At the time, an explosion of new research made it “inevitable,” Atkinson said, that Cornell would need to respond to climate change, and that agriculture would play key roles in reducing greenhouse gas emissions and in feeding a growing global population. The Advisory Council had a sustainability task force focused on New York state.

But Atkinson believed Cornell had the potential to offer something more powerful: an endowed, multidisciplinary center to address sustainability.

“I felt that Cornell, as the highest-ranked American university with a school of agriculture, was the place to do this,” says Atkinson. “Cornell’s advantage was its overall excellence in other disciplines, combined with an existing culture of encouraging faculty to work across their fields.”

Over the next four years, Atkinson’s enthusiasm and engagement spurred efforts by Cornell’s leadership and faculty to expand the scope of existing plans, leading to the successful pilot of a university-wide sustainability center. Atkinson stepped up to seed the new endeavor and then, in 2010, he and his wife Patricia permanently endowed the Cornell Atkinson Center for Sustainability.

As it turns 10, Cornell Atkinson is celebrating its accomplishments while focusing with renewed urgency on creating more powerful ways to translate knowledge into action.

The stakes have never been higher. Across the globe, increasing numbers of people are losing their homes and livelihoods to climate disasters, increasingly extreme and unpredictable weather, and an unprecedented deadly pandemic.

The center’s biggest impact initially came from two programs: a series of topical luncheons open to all faculty, and its Academic Venture Fund (AVF).

The lunches built a universitywide intellectual community focused on sustainability that would significantly shape the future of the center’s faculty fellows and their work.

In 2008, applied economist Miguel Gómez, associate professor at the Charles H. Dyson School of Applied Economics and Management, had recently joined the faculty when his senior colleague Chris Barrett, the Stephen B. and Janice G. Ashley Professor at Dyson and a Cornell Atkinson faculty fellow, invited him to a luncheon. Gómez was energized by Cornell’s support for cross-college research – but was also concerned that working with Cornell Atkinson might distract from his departmental workload.

“But I remember Chris telling me that the power of Cornell Atkinson’s multidisciplinary groups to address real problems could only enhance my work,” Gómez says.

Since 2008, Gómez has worked with plant scientists, engineers, computational biologists and others on nearly 20 Cornell Atkinson projects. Launched in 2008, the fund became crucial for getting risky, early-stage, interdisciplinary research projects to the proof-of-concept phase. Since its inception, the fund has supported more than 280 Cornell researchers from every college and school and has led to millions of dollars in additional funding for sustainability research.

“These modest AVF investments allowed us to form a team, hire grad students and start gathering data,” says Gómez. “From there, we were able to attract $15 million in additional funding to conduct larger, longer-term projects supported by the U.S. Department of Agriculture and the National Science Foundation (NSF). It’s quite amazing.”

Physician and epidemiologist Saurabh Mehta, associate professor of global health, epidemiology and nutrition in the College of Human Ecology, and David Erickson, the S.C. Thomas Sze Director of the Sibley School of Mechanical and Aerospace Engineering, received additional large, multiyear awards to refine and expand their AVF-funded inventions, including a smartphone-based platform for point-of-care nutritional status, stress and disease diagnoses.

For Drew Harvell, professor of ecology and evolutionary biology in the College of Arts and Sciences and former Cornell Atkinson Faculty Director, AVF funding opened a wider, more challenging research agenda on disease ecology at the intersection of human and environmental health. Harvell’s initial AVF projects with then-postdoctoral fellow Joleah Lamb led to two publications in the journal Science; a five-year Research Coordination Network grant from the NSF, with co-principal investigator Kathryn McComas, Ph.D. ’00, vice provost for engagement and land-grant affairs and professor of communication in CALS; and another NSF grant with Smithsonian partners.

“Cornell has such superb researchers, but we’re all working so hard that it’s difficult to find the extra time and funds to integrate across fields,” says Harvell. “The energy created by Cornell Atkinson and my time as Faculty Director there helped me put the pieces together.”

‘Progress is what we want’

By the time Cornell Atkinson was endowed in 2010, it had supported 220 faculty fellows across 10 colleges and 55 departments and had awarded more than 40 grants totaling more than $4 million. Three years later, David Atkinson endowed the center’s directorship to honor the first director, Francis J. DiSalvo, the John A. Newman Professor Emeritus in the Department of Chemistry and Chemical Biology in the College of Arts and Sciences, recognizing his success and retirement. These gifts launched Cornell Atkinson on a new trajectory, drawing external partners into its expanding sustainability community.

In 2012, the Environmental Defense Fund (EDF) became the center’s first strategic partner, with the creation of the EDF-Atkinson Innovation for Impact Fund (IIF). The fund supports projects designed jointly with external partners to speed development, testing and implementation of evidence-based solutions to some of the world’s toughest sustainability problems.

In 2015, Joe Rudek, lead senior scientist at EDF, participated in an IIF project with professor of civil and environmental engineering, John Albertson and Google Earth to record the first “top down” methane emission measurements via remote sensing from a Google Street View car. The team found emissions were much larger than previously reported.

“These findings added to EDF’s ongoing efforts to identify and reduce the sources of high levels of methane emissions, which account for 25% of current global warming,” Rudek says.

Like EDF, Cornell Atkinson’s newer partners are invested in finding practical ways to, as Atkinson says, “move the ball down the field.” Cornell Atkinson has co-funded more than 35 IIF projects and expanded its strategic partnerships with other organizations, including The Nature Conservancy, Resources for the Future, The Sustainability Consortium, and Field to Market.

“If it’s not implemented, it’s no good,” Atkinson says. “Progress is what we want.”

As a water quality expert, Cathy Kling frequently worked with outside organizations and government agencies to develop research. However, this type of collaboration is unusual in universities, says Kling, the Tisch University Professor in Dyson and now one of three Cornell Atkinson Faculty Directors.

In 2016, Provost Michael Kotlikoff sought to change that by launching a Radical Collaboration initiative to attract new faculty dedicated to advancing Cornell’s collaborative opportunities. Kling became the first sustainability faculty hire under the new initiative. The position, which split her time between Cornell Atkinson and her department, re-energized her career at a point when she questioned whether to stay in academia or leave to pursue other work.

“I’d been trying to move toward this for the last 10 to 15 years,” says Kling, whose research quantifies the social cost of water pollution. “Cornell has this really impressive, highly engaged and energetic sustainability hub. Here, I could help think about how to implement ideas, trial and error new methods and join others to find better ways to integrate our research with the outside world.”

The Radical Collaboration initiative also prompted David Lodge, who in 2016 became Cornell Atkinson’s second director, to imagine the center taking a more proactive role in preparing the next generation of sustainability researchers to excel in this new era of collaborative work.

Cornell Atkinson now offers more internships and opportunities for graduate and postdoctoral research with partners like EDF. In 2018, Cornell Atkinson and EDF launched the Atkinson Sustainability Leadership Program to connect younger scholars across disciplines and provide skills and training in collaborative sustainability research.

Katie Fiorella was part of the first cohort of Atkinson Postdoctoral Fellows in 2015, partnering with WorldFish Cambodia to explore how fish refuge ponds – community-managed protected areas located within flood plains – benefit fisheries and improve the income, nutrition and well-being of local fishing families. Before the fellowship, she had never collaborated with a partner as large and well-resourced as WorldFish.

“Working with partners can be hard for many reasons,” says Fiorella, now assistant professor of population medicine and diagnostics sciences in the College of Veterinary Medicine and co-lead for the food systems concentration in the Master of Public Health program – an outgrowth of Cornell Atkinson.

“The fellowship provided a very valuable opportunity to prioritize partnering with an organization,” she says, “which made a huge difference in my ability to do the research I care about.”

Rising to the challenge

Today Cornell Atkinson engages with 604 faculty fellows and has become a model for the “One Cornell” approach and other interdisciplinary programs.

But as Cornell Atkinson has grown, so have the challenges. “Research alone is insufficient to change opinions, practices, products and policies,” Lodge says.

This reorientation is crucial for the center to realize its full potential and generate tangible returns, David Atkinson says.

“If our expertise were confined to Cornell,” he says, “it could never make the impact we need.”

Sarah Thompson is a freelance writer with the Cornell Atkinson Center for Sustainability.