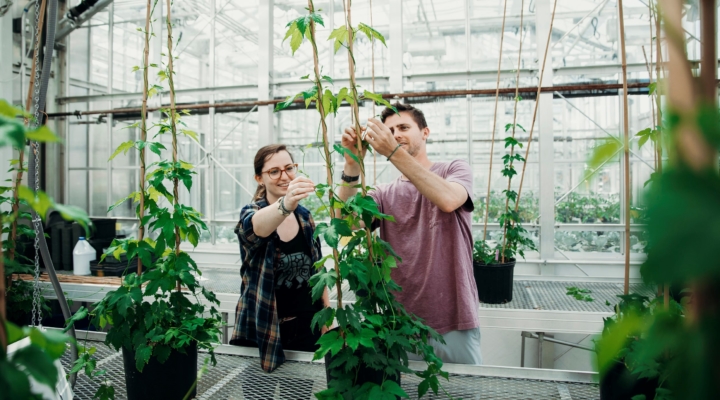 Agriculture and food are multibillion-dollar industries in New York, and the name change underscores the value Cornell AgriTech brings to improving the health of the people, environment and economy of the state and beyond. Based in Geneva, New York, Cornell AgriTech has expanded to more than 900 acres of fields, orchards and vineyards led by more than 300 faculty, scientists, staff and graduate students dedicated to delivering solutions to farmers and business and propelling economic development in New York.

With 12 research farms and 17,500 square feet of greenhouse space, Cornell AgriTech researchers are focused on food and intensively cultivated crops, with a major emphasis on fruits and vegetables. Researchers are also pioneering the study of plants that are engines of the future, from sources of bioenergy to emerging crops like industrial hemp that offer promising opportunities for growers in New York.

New York food manufacturing has been growing nearly 10 percent annually in recent years, and the industry supports more than 52,000 jobs in the state. Cornell AgriTech is a leading research and information hub for food manufacturing and safety. Since 1988, the Cornell Food Venture Center has helped more than 13,000 food entrepreneurs commercialize more than 20,000 products, while the Institute for Food Safety at Cornell supports the production of safe and novel foods that increase the economic viability and sustainability of the food industry in New York and beyond. The new Center of Excellence in Food and Agriculture at Cornell AgriTech will work to accelerate business development and grow the New York agriculture and food economy.

School of Integrative Plant Science plant breeders based at Cornell AgriTech are working with some of the most popular food crops to improve flavor and nutrition and breed plants optimized to climatic conditions. The apple breeding program led by professor Susan Brown is one of the largest fruit breeding programs in the world, releasing 65 apple varieties including recent favorites RubyFrost and SnapDragon. The berry breeding program at Cornell AgriTech is the oldest in the United States, with more than 100 berries released in its history. Berry breeder Courtney Weber, associate professor of horticulture, has released numerous strawberries and raspberries in recent years, breeding for bold flavors and colors that resonate with consumers while meeting the needs of growers and helping support New York’s $20 million berry industry.

Cornell AgriTech experts in entomology, plant pathology, horticulture and plant breeding have been critical partners in establishing New York has a leader in grape and wine production. The grape breeding program directed by professor Bruce Reisch has introduced 58 varieties of table and wine grapes, contributing tens of millions of dollars annually to the state economy.

At the same time, Cornell AgriTech scientists are looking to future food crops that will thrive in New York and along the East Coast. The Eastern Broccoli Project spearheaded by professor Thomas Björkman is working to create a $100 million broccoli industry that supports a year-round supply of quality, eastern-grown broccoli for East Coast markets.

“Cornell’s New York State Agricultural Experiment Station has long been recognized as a powerhouse of innovation, supporting the growth of the agricultural community in New York state and providing the research that drives the future of agriculture,” said Richard A. Ball, commissioner of agriculture at the New York State Department of Agriculture and Markets. “I congratulate Cornell and its talented scientists and researchers on their accomplishments over the years and this exciting next chapter as Cornell AgriTech. The team at Cornell AgriTech will no doubt continue to impact our economy, paving the way for new opportunities for our farmers, enhancing the competitiveness of New York’s producers, and increasing the long-term success of the state’s agricultural industry.”