Home » Corn varieties getting some help from their relatives 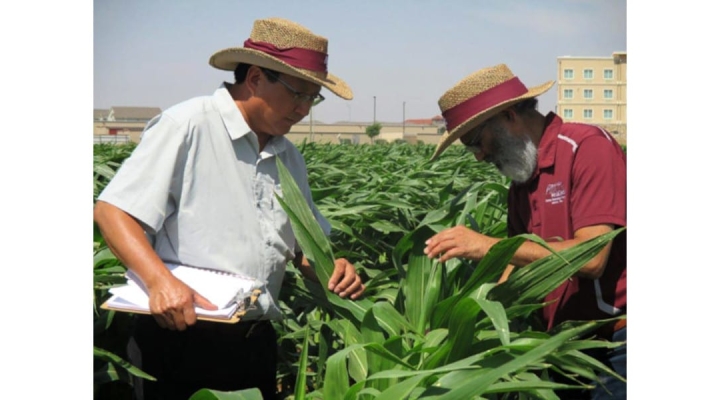 The two-year project, funded by the U.S. Department of Agriculture National Institute of Food and Agriculture Crop Protection and Pest Management Competitive Grants Program, is designed to address current challenges such as increased pest resistance, decreased efficacy of Bt technology, vulnerability to caterpillar pests such as fall armyworm, and preharvest mycotoxin contamination.

Specifically, this project, titled “Utilizing Native Resistance from Wild Relatives for Integrated Insects and Disease Management in Sustainable Corn Production,” will examine disease management and the expression, stability and value of native resistance for integrated insect management. The study will also include the development of economic profitability models that incorporate a cropping systems approach for producers.

This project is based on Xu’s more than 10 years of efforts in crossing corn with its wild relative Tripsacum, or gamma grass, which provides native insect and disease resistance. In the new project, the team will advance selecting for:

– Tolerance to drought and heat stress.
– Resistance to preharvest mycotoxins such as aflatoxin and fumonisin contamination.
– Resistance to devastating insects such as fall armyworm.
– High yield.
– Strong adaptation to Texas and the southern U.S.

Xu has developed a set of inbred lines from breeding crosses between corn and Tripsacum, thanks partly to funding from the Texas Corn Producers Board, the High Plains Underground Water Conservation District, the National Corn Growers Association Aflatoxin Mitigation Center of Excellence and other funding agencies.

The genes from Tripsacum are helping to broaden the genetic basis of current U.S. corn production and add the native resistance to disease and insects that are otherwise absent in the cultivated corn germplasm pool, he said.

“We’ve evaluated these lines under heavy natural fall armyworm infestation pressure in Lubbock and Puerto Rico,” Xu said. “Our results show that several of the hundreds of evaluated Tripsacum-derived lines are highly resistant to fall armyworm and can produce high-yielding hybrids.”

The native resistance also can boost the efficacy of pest control from transgenic Bt genes and extend the lifespan of the Bt technology, Parajulee said.

Over the next two years, the team will characterize the expression of native resistance from Tripsacum against fall armyworm and quantify if the native resistance to insects can lower mycotoxin accumulation in grains.

The team will also determine the additive value of native resistance and commercial Bt traits across the range of production conditions.

They will also develop specific production optimization models that maximize the net returns from the fall armyworm and aflatoxin-fumonisin management, empowering producers to optimize the input resources for sustainable corn production, Parajulee said.

Other scientists involved in this project are Tom Isakeit, Ph.D., Texas A&M AgriLife Extension Service plant pathologist in the Department of Plant Pathology and Microbiology; Donna McCallister, Ph.D., AgriLife Research assistant professor of agricultural and applied economics with a joint appointment at Texas Tech University in Lubbock; and Muhammad Haseeb, Ph.D., associate professor in the Department of Entomology at Florida A&M University.