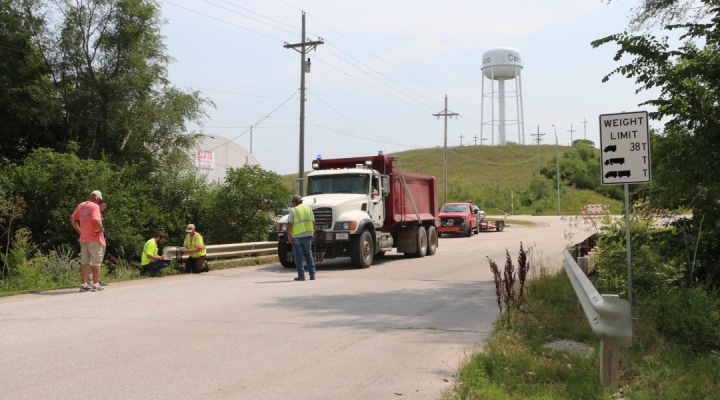 This is the first year the Nebraska Corn Board has partnered with the Soy Transportation Council to study the integrity of the state’s rural bridges. (Courtesy Photo)

LINCOLN, Neb. — Nebraska farmers depend upon rural bridges to ensure corn, soybeans and other commodities are delivered to the local elevator or processing facility. Unfortunately, a significant number of rural bridges in Nebraska are load restricted, requiring vehicles transporting agricultural commodities to incur a detour – often at considerable distances. These detours add significant costs in the food delivery system and reduced profitability for Nebraska farmers.

To promote better evaluation of the state’s rural bridges, the Nebraska Corn Board (NCB) and the Soy Transportation Coalition (STC) have partnered with Kirkham Michael – an Omaha-based civil engineering firm with operations in Nebraska, Kansas and Iowa – on an innovative project designed to demonstrate the effectiveness of load testing technology when assessing the load carrying capacity of rural bridges.

“For our team of engineers, public safety has always been, and will always be, our number one priority when evaluating the condition of bridges,” said Steve Reneker, vice president with Kirkham Michael. “However, what we continue to learn is that the sole reliance on visual inspection and theoretical calculations can result in bridges being load restricted or identified for rehabilitation or replacement sooner than necessary. This not only results in costly detours or limited access, but it prevents our state and local governments from most efficiently targeting taxpayer dollars to those bridges in greatest need of replacement and repair.”

The focus of the project is to evaluate bridges utilizing load testing sensors attached to the underside of the bridge.  After the sensors are attached, test loads are driven over the various segments of the bridge surface to determine a precise understanding of the capabilities of the bridge. Funding to perform the testing was provided by NCB and STC.

“When using this load testing technology, we have learned there are three potential outcomes,” says Doug Saathoff, chairman of the Nebraska Soybean Board, director on the STC and farmer from Trumbull. “First, the bridge may be in better condition than originally assessed. Second, the testing closely confirms the original assessment. Finally, the testing could suggest the bridge is in worse condition than originally assessed. While the most frequent outcome is that the bridge is in better condition than assessed, all three of those outcomes are successful because greater clarity is being achieved. We see this technology as another tool in the toolbox that we would like to see more widely utilized in rural Nebraska.”

“Dixon County was pleased to participate in this project,” says Lisa Lunz, a member of the Dixon County Board of Supervisors and farmer from Wakefield. After evaluating our three bridges utilizing the load testing equipment, the load restrictions on all three were able to be safely removed. As county supervisors, our priorities in maintaining our bridge inventory are public safety, practicing good stewardship of taxpayer funding and ensuring the public has as much access as possible to the county infrastructure. Load testing technology has demonstrated we can achieve all three of these objectives.”

“This project has demonstrated how Nebraska corn and soybean farmers are working together to promote solutions to our transportation challenges,” says Jay Reiners, chairman of NCB and farmer from Juniata. “Since funding is so scarce, we need to explore ways to better understand which bridges truly require immediate repair or replacement and which ones can safely handle the trucks that transport grain produced in our state. We look forward to continuing to promote this innovative approach throughout rural Nebraska.”

Established in 2007, the Soy Transportation Coalition is comprised of thirteen state soybean boards, the American Soybean Association, and the United Soybean Board.  The goal of the organization is to position the soybean industry to benefit from a transportation system that delivers cost effective, reliable, and competitive service.

CPDF to host Grazing on the Greens