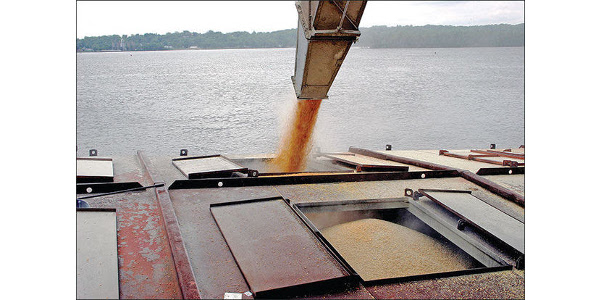 “Although outpacing the previous marketing year’s export pace by 334 million bushels through the first half of the 2018-19 marketing year, the second half saw exports come in 707 million bushels below the pace in 2017-18. Abundant South American crops and competitive pricing saw the U.S. export share of the world market fall precipitously,” he adds.

“Uncertainty about the size of the 2019 U.S. corn crop continues,” Hubbs says “A sizeable reduction in corn production this year will influence export totals. South American production looks to have a say in the U.S. export market share as well.”

“The ability to attain the current projection hinges on the size of the upcoming crop in South America and the trade negotiation dynamics associated with China,” Hubbs says.

“While the Argentine production forecast is down slightly, a larger soybean crop out of South America seems in the offing barring production issues. USDA forecasts 3.1 billion bushels of soybeans exports from Brazil and Argentina over the marketing year, up from last year’s 3.07 billion bushel estimate. Without a crop shortfall, stronger South American exports appear probable under current trade scenarios,” Hubbs says.

“A stronger pace of exports this marketing year is a function of crop size both domestically and overseas. The Oct. 10 Crop Production report will be significant for export potential and price prospects in corn and soybean markets. While exports started slowly, the potential to meet USDA projections still exists due to uncertainty on production potential and trade negotiations,” he concludes.

Discussion and graphs associated with this article available here: https://youtu.be/bzpa-mVQZ3M or https://uofi.box.com/s/1jrt0yu4gocmi48my41aak8npql14y5w