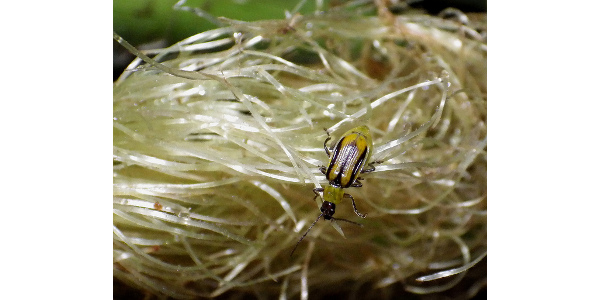 The Bt corn rootworm trait has been extremely valuable to corn growers as it provides safe and effective control of corn rootworm insects and has allowed farmers to reduce insecticide use. (Sarah Zukoff via Flickr)

JOHNSTON, Iowa — The Bt corn rootworm trait has been extremely valuable to corn growers as it provides safe and effective control of corn rootworm insects and has allowed farmers to reduce insecticide use. These Bt traits allow the corn plants to produce a protein which prevents this pest from damaging the roots. Previously, corn rootworm resistance has been confirmed with some of the existing commercial Bt events.

Just this week, Corteva has reported that the first case of corn rootworm resistance to their Herculex® trait has been confirmed in an individual field in Delaware County, Iowa. (See story here) The Herculex trait contains a different protein than the other companies’ rootworm events and offers another line of defense against the rootworm.

Corteva has reported this to the EPA, which regulates these Bt traits, and Corteva is working with farmers in Delaware County to limit the spread of this resistance. These corn rootworm traits are very valuable for corn growers and every effort is being made to ensure these traits remain an effective tool for as long as possible.

“Farmers want to use best tools and technology available, including these Bt traits. However, to maintain their effectiveness, good stewardship of these technologies is important”, according to Mark Mueller, ICGA Director from District 3. “It is also important to use appropriate Integrated Pest Management (IPM) approaches when dealing with crop pests, including weeds, insects and diseases. These approaches allow for better control and will help maintain effectiveness of our biotech and chemical technologies to delay or avoid resistance developing.”

Iowa is the first state to develop a pest resistance management plan. The Iowa Pest Resistance Management Program (IPRMP) was initiated in 2015 to be proactive in helping growers avoid weed, insect and disease resistance issues and to deal with them when they arise. The IPRMP outlines approaches for effective, integrated management solutions that will sustainably control weeds, insects and disease pests. Iowa Corn has been involved with IPRMP from the beginning and supports a staff member at Iowa State University to establish pilot projects to address various on-farm pests. The IPRMP is currently seeking volunteers to address corn rootworm resistance issues.

For more information on the Iowa Pest Resistance Management Program, go to www.protectiowacrops.org.

Keeping pesticide applicators and the environment safe
May 11, 2021