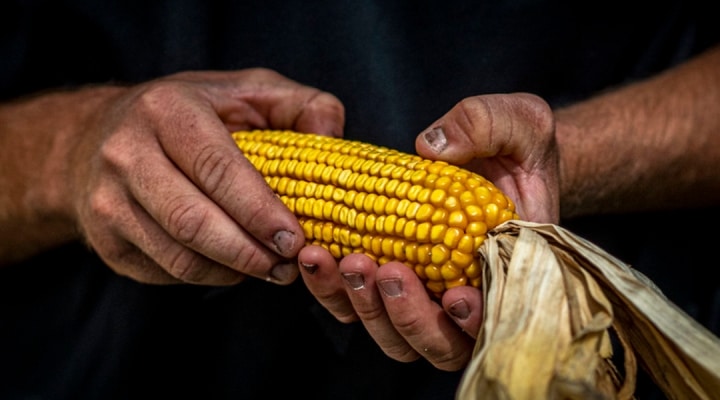 Maize, or corn as most North Americans know it, was first cultivated 10,000 years ago in southern Mexico. (U.S. Department of Agriculture, Public Domain)

GOSHEN, Ind. — Last week, I wrote about turkeys in a Thanksgiving themed column.  This week, I will focus on another Thanksgiving icon: corn.

Maize, or corn as most North Americans know it, was first cultivated 10,000 years ago in southern Mexico.  It is thought that all modern types of corn arose from the same plant, named teosinte, a wild grass that has large seeds, which would be almost indistinguishable as the parent of modern corn.  It must have been amazing to observe these plant breeders!  Imagine doing all this work with little in the way of equipment and written language, passing all the techniques from generation to generation by spoken word.  As they continued to improve the quality of the corn crop, the popularity grew, and through the extensive trade routes that existed even then, within a few thousand years, people were growing corn as a staple from Canada to Argentina.

When the Spanish arrived in the late 1400s, they took corn back to Europe, where it made its way to the rest of the globe.  Early European settlers on our east coast learned to cultivate maize from the Indians, for whom corn had become a dietary staple.

Over time, sweet corn, popcorn, flour corn, dent corn and flint corn became the most well-known of the maize varieties.  The primary difference in the corns is the endosperm (where the sugar and starches are stored), the hardness of the kernel, and the color.

Flint corn, which is also known as Indian corn or ornamental corn, has hard, often multi-colored, kernels.  Flint corns are known to have dry, hard starch inside the kernel, which makes them ideal for long term storage and outdoor decorations in the Fall. Flint corn can be used as livestock feed in similar ways that we use dent corns.

Popcorn is also a type of flint corn, with small, hard kernels that hold in water, which turns to steam when heated and bursts open for our snacking delight.   You can find various colors of popcorn kernels on the market today, a node to their genetic relationship to the Indian corns.

The yellow dent corn (field corn) is the majority of corn you see planted in Midwest.  Dent gets its name from the dent that forms when a kernel loses moisture. This type of corn is used for animal feed, as well as in many food processing, manufacturing and carbohydrate uses.

Sweet corn, the type of corn we typically eat fresh, frozen or canned, is mostly a descendent of field corn, which has a naturally recessive gene that slows the conversion of the sugars into starch.  The early cultivators of corn noticed that some plants had sugary kernels, saved those seeds, and crossbred them with other sweeter corns to create the forefathers of today’s sweetcorn.

Another type of corn, flour corn, is known for a softer, starchy endosperm and a thinner outer layer known as the pericarp.  The kernel color of flour corn ranges from yellow to white.  It is considered more difficult to grow commercially because of higher moisture content and associated handling issues.  As the name implies, this type of corn is used for baking items such as tortillas, chips, or cornbread, which is commonly served on Thanksgiving Day.

corn grain holiday maize on the lighter side Thanksgiving

Man who had open-heart surgery wins a $1 million lottery prize after the ticket came in a get-well card
December 1, 2021

The Chicago Tool Library is planning a move after growing so fast it's run out of space for donations
November 30, 2021