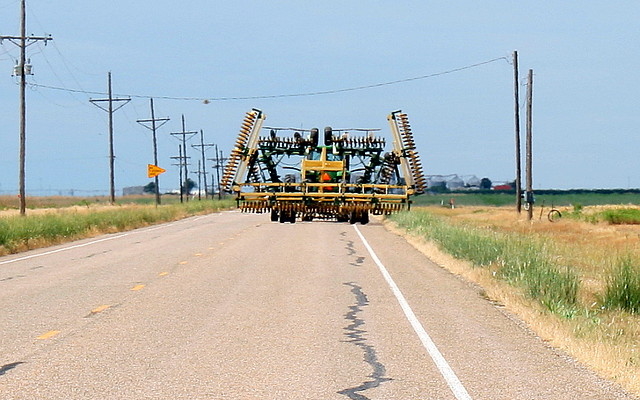 Right now it’s doubly dangerous for farmers moving equipment on Virginia’s roadways. That’s because some farmers are busy harvesting corn, while others are applying crop protectants on their soybean fields. (photo by Chuck Coker, creative commons/flickr.com)

RICHMOND, Va. — Right now it’s doubly dangerous for farmers moving equipment on Virginia’s roadways. That’s because some farmers are busy harvesting corn, while others are applying crop protectants on their soybean fields.

“This means a lot of farm equipment on the roads all at one time,” noted Robert Harper, grain manager for Virginia Farm Bureau Federation. “Combines and sprayers and augers are all going to be moving on the highways and back roads from farm to farm.”

According to the National Ag Safety Database, “transporting agricultural machinery from one field to the next by way of public roads is a necessity for many in agriculture.”

Motorists who are unfamiliar with slow-moving agricultural machinery “can make this a dangerous situation,” the NASD shared on its website.

“I’m on a busy commuter road where people drive on it but don’t live there,” said Steven Crocker, who raises grain in Isle of Wight County. He’s in the middle of harvesting corn and said transporting a combine can be a big challenge.

He said bridges are especially troublesome because even the ones billed as two lanes are too narrow for a vehicle and a piece of farm equipment. “If it’s an 18-foot bridge, oncoming cars need to stop, because the wheel base of a grain combine is 15 feet. You do the math.”

Crocker said he’s landed in ditches a couple of times due to other drivers trying to pass him, but fortunately has never overturned his equipment.

Drivers may not realize how large farm equipment is, how hard it is to pass and how slow it travels, explained Jonathan Grimes, a Wythe County farmer and chairman of the VFBF Young Farmers safety subcommittee.

That group has been trying to find ways to educate drivers about what to do when they encounter farm equipment on the road.

Grimes said more farmers are renting or buying land wherever they can find it, and that often means they need to move equipment between locations.