Home / Iowa / Corn growers may need to scout for European corn borer
A new user experience is coming! We'll be asking you to login to your Morning Ag Clips account March 1st to access these new features.
We can't wait to share them with you! Read more here. 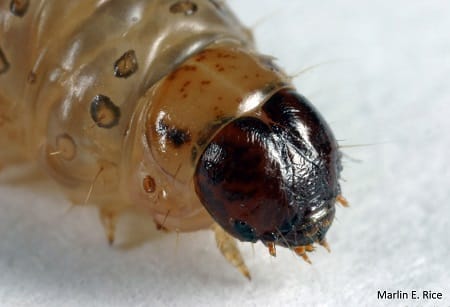 AMES, Iowa – Corn growers may need to be on the lookout for a common insect pest this year, especially if they’re no longer using a transgenic Bt seed that is resistant.

In 2019, about 15% of corn grown in Iowa and 17% grown in the United States did not contain a Bt trait, according to an article by Ashley Dean and Erin Hodgson, extension entomologists with Iowa State University Extension and Outreach.

Not using a Bt trait makes the crop susceptible to certain insects, especially European corn borer. The European corn borer, often referred to as ECB, is an invasive insect that feeds on almost the entire corn plant except the roots. ECB can result in significant yield reductions caused by poor ear development, broken stalks and dropped ears.

Dean and Hodgson are reminding farmers about the importance of scouting their fields for ECB and taking appropriate action if evidence of ECB is found.

In a recent article by Dean and Hodgson called “Planted Non-Bt Corn? Plan to Scout for European Corn Borer,” they say that farmers have been able to control ECB since Bt corn became available in 1996. However, not everyone plants Bt seed, especially in years when corn prices are low.

“For farmers who opted out of Bt corn this year, scouting for ECB (and other corn pests) will be essential,” Dean and Hodgson write.

ISU Extension and Outreach provides a comprehensive guide to understanding ECB and its association with other pests, found in the publication “European Corn Borer – Ecology and Management with other Corn Pests.”

Producers can learn more about the life cycle and identification of ECB in the ISU Extension and Outreach publication “Ecology and Management of European Corn Borer in Iowa Field Corn.”

While many Iowans may remember what ECB looks like, Hodgson said it’s still a good idea for producers to refresh themselves on what they need to be looking for and whether pesticide use is justified.

Hodgson said it’s also possible that some producers have forgotten about the pest, or if they’ve started farming after 1996, that they may not have past experience with ECB.

Dean and Hodgson’s article and the publications from ISU Extension and Outreach help provide answers and offer photos to assist with identification.