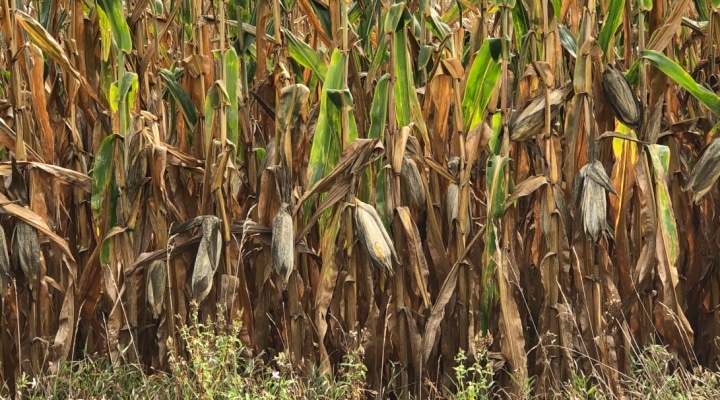 GOSHEN, Ind. — For several weeks now, you may have noticed that some corn ears are drooping around the area. Bob Nielsen, Extension Corn Specialist with Purdue’s Agronomy Department, recently shared his thoughts about droopy ears and what that means for the upcoming harvest.

In healthy corn, the ears remain erect until some time after the black layer forms on the kernel.  At that point, the plant is physiologically mature.  Once mature, the ear shank, which attaches to the ear to the stalk, begins to collapse, and the tip of the ear begins to decline towards the ground.  This is desirable because the ear can no longer collect rainfall inside the husk, which could lead to some ear rot.

This year, however, we are seeing premature ear drooping.  According to Nielsen, the extended period of dry weather, plus sunny, relatively low humidity days since August are the reason.  The droopiness is essentially wilting (lack of plant turgidity), plus some cannibalization of the ear shank for nutrients and water.  The ear shank eventually weakens and the ear droops.

How will this affect yields this fall?  Nielsen points out the shank is the pipeline connecting the ear to the food being produced by the plant. If an ear droops prematurely, before the black layer forms, the ear will likely form a premature black layer.  If the grain fill were shut down at the dent stage of grain development (when the milk line is barely visible), yield losses could be as much as 40%.  If grain fill is totally shut down at the late dent stage (milk line halfway between the dent and the tip), yield losses for affected ears may be around 12%.

In his example, Nielsen said that a field with 10% droopy ears, that drooped at the late dent stage, the whole field loss would be about 1.2% (10% of the ears X 12% yield loss per ear).

It is important to realize that the corn you see driving down the road may not represent the entire field well.  Often, corn in the end rows has to deal with added stress like soil compaction.   The only good way to do an assessment is to walk the field in a random fashion.  A “55 mile per hour windshield survey” may give you worse results that the real world.

From ‘price takers to price makers’