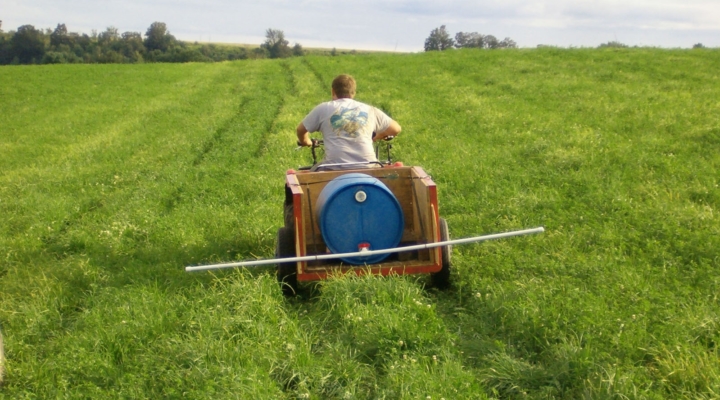 ITHACA, N.Y. — New York corn growers can now reap the benefits of the long-term commitment made by the farmer-driven Northern New York Agricultural Development Program (NNYADP) to the research needed for managing the most destructive alfalfa crop pest. Not only does the science-built biocontrol nematode protocol significantly reduce alfalfa snout beetle populations, it also has shown management capacity for dealing with corn rootworm, wireworm, and white grubs.

“We are confident that dairy farmers who inoculate their fields with these biocontrol nematodes for management of alfalfa snout beetle or corn rootworm are also benefitting from reduced populations of wireworms and white grub insects,” Cornell University entomologist Elson Shields, Ph.D., Ithaca, N.Y., said.

The successful biocontrol nematode protocol developed by Shields and research technical Antonio Testa is now being applied to multiple crops in New York State and in multiple states.

More than 500,000 acres in New York State are known to have alfalfa snout beetle infestation. Shields’ research team estimates the total cost of alfalfa snout beetle left untreated on a farm  ranges from $300 to $600 per cow. The one-time cost of applying the biocontrol nematodes is approximately $30 per acre, plus any application costs.

Farmers interested in applying the biocontrol nematodes through the Shields Lab rearing program at Cornell have only a three-year window to do so. It requires three to five years to totally inoculate a farm to significantly reduce the alfalfa snout beetle populations. The Shields Lab will stop rearing the nematodes as part of its research program in 2021.

For more information on purchasing the biocontrol nematodes and information on proper application methods, growers should contact the Shields Lab at least 45 days prior to a planned application. Contact Tony Testa at 607-591-1493 or at28@cornell.edu. Farmers can also work through Cornell Cooperative Extension Field Crops Specialists Kitty O’Neil and Mike Hunter, and Doug Zehr with the Lowville Farmers Co-Op.

Farmers interested in applying the biocontrol nematodes for corn rootworm management may be eligible to participate in a Northeast Sustainable Agriculture and Research Education grant for the next three years to receive reduced biocontrol nematode pricing on a limited basis. For more information, contact Mike Hunter at 315-788-8450 or Tony Testa at 607-591-1493 for details.

Research has shown that a single application of the biocontrol nematodes can persist for 10 years across an alfalfa-corn rotation and that the nematode population was higher after four years of corn than in alfalfa before the corn planting.

The Shields Lab is available to work with anyone who would like to develop a business enterprise to supply nematodes to custom applicators or to farmers who wish to apply them on their own.

Update to the Vineyard Improvement Program