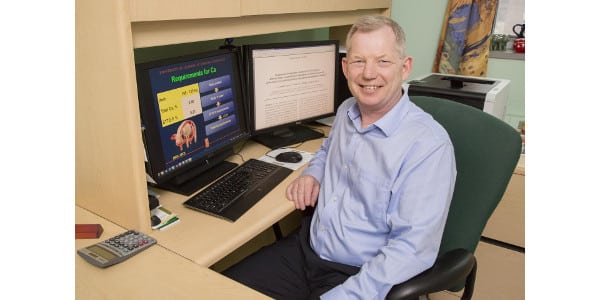 URBANA, Ill. — Pigs have better feed conversion rates with copper in their diets, but until now, scientists didn’t fully understand why. Existing research from the University of Illinois shows copper doesn’t change fat and energy absorption from the diet. Instead, according to new research, the element seems to enhance pigs’ ability to utilize fat after absorption, resulting in increased energy utilization of the entire diet.

“Our results indicate copper hydroxychloride is enhancing metabolism of fat, and that’s how the pigs get more energy. And that, we believe, can explain why pigs have better feed conversion rates when we feed this copper source in the diets,” says Hans H. Stein, professor in the Department of Animal Sciences at Illinois and co-author of a new study in the Journal of Animal Science.

“We saw greater expression of genes involved in lipid metabolism and lipid utilization in the liver, adipose tissue, and to a lesser degree in the muscle,” Stein says. “This indicates that dietary copper may affect signaling pathways associated with lipid metabolism by improving the uptake, transport, and utilization of fatty acids.”

In Europe, Stein says, environmental concerns prompt copper regulation in waste streams. That’s why understanding copper’s role in pig nutrition is so important. If less copper or a different form with a smaller environmental footprint could fulfill the same biological function, producers could continue to benefit while also protecting the environment.

— University of Illinois College of Agricultural, Consumer and Environmental Sciences via EurekAlert!

Delivering high-quality protein to families in need
May 12, 2020