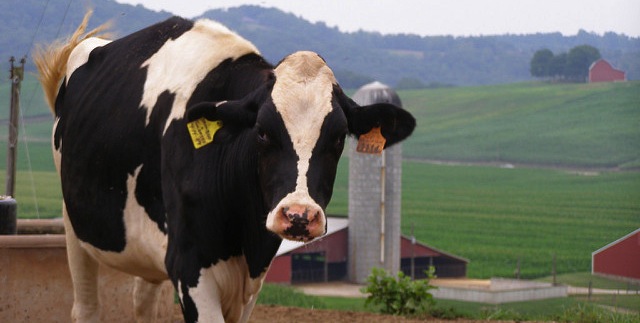 The researchers assessed seasonal effects on pregnancy by examining more than 667,000 records from Holstein cows calving in Florida between 2000 and 2012. (Mike, Flickr/Creative Commons)

PHILADELPHIA — Environmental influences affecting cows during pregnancy have been shown to induce life-long physical and metabolic changes in the offspring. To learn more about the effects of heat stress on calves conceived during the summer, Pablo Pinedo, from Colorado State University, and Albert De Vries, from the University of Florida, examined data from more than 150 herds of dairy cattle in Florida, where cows experience hot summers and mild winters.

Previous studies have shown many different effects related to environmental or dietary stressors during pregnancy on the resulting offspring, both as calves and as adult cows, and summer heat is a significant environmental stressor in many areas of the United States. The researchers assessed seasonal effects on pregnancy by examining more than 667,000 records from Holstein cows calving in Florida between 2000 and 2012. Using environmental data from the National Oceanic and Atmospheric Administration, the researchers estimated the resulting heat stress on each of the 152 herds by comparing milk yield during summer and winter months to identify which herds were most likely to suffer from heat stress during the summer.

“Our results showed that cows that arose from a pregnancy conceived in winter had, on average, better survival, better reproduction, and greater milk production than cows arising from a summertime pregnancy,” lead author Pablo J. Pinedo said. “These effects were more pronounced among first-parity cows compared with older cows.”

Although previous studies reported the effects of heat stress during late pregnancy, results from this study suggest that heat stress at the time of conception may permanently program the genetics of the adult animal by affecting epigenetic processes within the early embryo. For some of the analyzed variables, the differences were moderate, and the variation among individuals and operations is highly dependent on management practices.

“This report adds to a growing body of literature that supports careful management of the mother at all stages of the pregnancy to ensure the highest level of productivity in the offspring,” commented Matt Lucy, Editor-in-Chief of the Journal of Dairy Science. The researchers anticipate further research into the potential mechanisms associated with the reported effects.