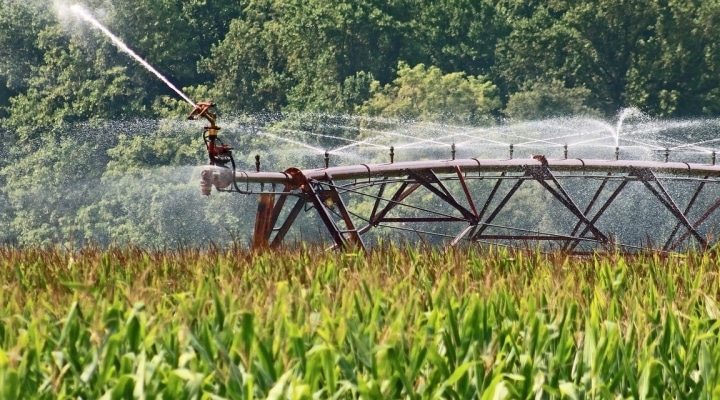 URBANA, Ill. — Drought and heat put stress on plants and reduce grain yield. For some farmers, irrigation is the answer. Many of us assume the practice boosts crop yields by delivering soil water, but it turns out irrigation’s cooling effect on crops is important in its own right.

In a recent U.S.-based study, a research team led by University of Illinois scientists discovered 16% of the yield increase from irrigation is attributable to cooling alone.

“This study highlights the non-negligible contribution of cooling to the yield benefits of irrigation. Such an effect may become more important in the future with continued warming and more frequent droughts,” says Yan Li, lead author on the Global Change Biology study and a former postdoctoral associate in the Department of Natural Resources and Environmental Sciences at Illinois. Yan is now an associate professor at Beijing Normal University.

Irrigation cools crops through the combined effects of transpiration – water loss through tiny holes in leaves called stomata – and evaporation from soil. Transpiration can only occur when there is a sufficient soil water supply; when roots sense dry soil, plants close their stomata to prevent water loss.  When this happens for long enough, plants heat up and suffer drought stress, sometimes leading to yield reductions

With soil water supply and temperature so inextricably linked, the researchers had to develop an innovative approach to separate out the cooling effect on yield. The team analyzed satellite-derived crop temperature and biomass data, irrigation maps, and county-level corn yield in Nebraska between 2003 and 2016. By comparing irrigated and rainfed sites, they found irrigation bumped yield by 81%, of which 16% was attributable to cooling and 84% to water supply. Irrigation also lowered July land surface temperatures by 1.63 degrees Celsius relative to rainfed sites.

“Crops grown in the irrigated part of the U.S. Corn Belt, mostly in Nebraska and some other western states in the Midwest, all feel the cooling benefit,” says Kaiyu Guan, principal investigator of the project and Blue Waters professor in the Department of Natural Resources and Environmental Sciences and the National Center for Supercomputing Applications at Illinois. “Crops feel happier when they are cooler.”

According to Li, teasing out irrigation’s dual contributions to yield will allow better yield forecasting into the future. The cooling effect has largely been neglected in previous crop models.

“When yield forecasters develop their models, they should realize cooling is another important benefit for irrigated cropland, and they need to take that into account. Otherwise, they may underestimate the irrigation benefit on yield,” he says.

Guan adds, “This matters not only for currently irrigated cropland like Nebraska. Under a warming climate, we envision that crops will need more water to grow the same biomass, and parts of the Corn Belt that are currently rainfed, like Iowa and Illinois, may also need irrigation.”

The article, “Quantifying irrigation cooling benefits to maize yield in the US Midwest,” is published inGlobal Change Biology [DOI: 10.1111/gcb.15002]. Co-authors include Yan Li, Kaiyu Guan, Bin Peng, Trenton E. Franz, Brian Wardlow, and Ming Pan. The research was supported by NSF CAREER, USDA NIFA and Hatch. The Department of Natural Resources and Environmental Sciences is in the College of Agricultural, Consumer and Environmental Sciences at the University of Illinois.